How Big Is Hurricane Maria?

Hurricane Maria has devastated the Caribbean island of Dominica, just days after it was brushed by Hurricane Irma.

Maria, now a Category 5 storm, is expected to remain very strong as it heads toward Puerto Rico, the Dominican Republic and Haiti.

How does that compare to other recent or major hurricanes?

Hurricane Irma killed at least 33 people in the U.S. and 51 in the Caribbean when it struck last week. At its peak, the diameter of Irma’s tropical-storm-force winds stretched for 300 miles — or about twice as wide as Florida’s peninsula, CNN reports.

Sustained winds of 115 miles per hour and a nine-foot storm surge helped Irma become the most intense storm to strike the U.S. since Katrina in 2005. Irma damaged 95% of the buildings on the Caribbean island of Barbuda and 65% of the houses in Florida Keys, according to the Guardian.

Hurricane Harvey dumped several feet of rain on southeast Texas in a matter of days and is thought to have caused at least 70 deaths in Texas. The New York Times reports that at its peak, Harvey measured 200 miles across.

Harvey caused 83 confirmed fatalities, one in Guyana and the rest in the United States.

Katrina measured at least 350 miles across before it made landfall near the Louisiana-Mississippi border as a Category 3 storm in August 2005, according to the Times.

Despite its middling Category ranking, Katrina brought intense storm surge, reaching 27.8 feet at Pass Christian, Weather Underground reports. Over 80% of New Orleans and its suburbs were flooded, while water reached over 10 miles inland from the coast in some areas. Katrina led to the death of 1,833 people and more than $100 billion in damage.

Andrew struck land as a Category 5 storm with sustained winds of 165 mph. But it was physically smaller than Irma, at about 30 miles across, The Washington Post reports. 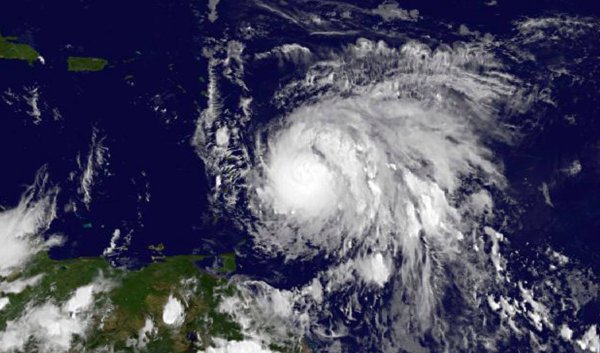 Is Hurricane Maria Coming to Puerto Rico or Florida? Here’s What We Know
Next Up: Editor's Pick