The students behind the University of California’s “Free Speech Week” said on Monday their events will go on despite not being able to rent large indoor event spaces.

“We’ll do it outdoors if we need to,” Pranav Jandhyala, a sophomore member of the Berkeley Patriot, the student group organizing the week, told the Washington Post.

The events, planned for Sept. 24 to 27, are set to feature controversial speakers like former Breitbart editor Milo Yiannopoulos, conservative commentator Ann Coulter and former White House chief strategist Stephen Bannon. Yiannopoulos promised the events after protesters forced him to cancel a planned speech at the university in February.

The University of California at Berkeley has emphasized its commitment to free speech throughout the protests over the past year. While students were organizing this week on their own, they planned to use school venues.

However, university officials on Monday said the Berkeley Patriot group had missed multiple deadlines and would not be allowed to use the indoor spaces it sought, according to the Washington Post.

An outdoor space will likely increase security concerns around the event, according to the Post. Berkeley has been on high alert over the past year, and especially since the election of President Donald Trump. Protesters from the right and left have frequently clashed as students invited various speakers to campus or demonstrated against other political events.

More than 100 faculty members have called for a boycott of events and classes during the Free Speech Week to protect the safety of students and the campus.

A university spokesman told the Post that Free Speech Week organizers need to comply with school regulations to keep their remaining event spaces. If they do not do so, they could reschedule, he said.

“We continue to hope that the student organization will meet its obligations and provide the campus and UCPD with the information needed to complete security arrangements,” Berkeley spokesman Dan Mogulof told The Post. “The University cannot defend spending hundreds of thousands of dollars to provide security arrangements for events based on a schedule built on a long list of unconfirmed speakers and/or a news release issued by an external commercial enterprise.”

But Yiannopoulos and Jandhyala, the Berkeley student, said they believe the university is trying to derail their event.

“Everything they say and do is designed to bully and intimidate their students into canceling the event.,” Yiannopoulos told the Post via email. “The event will proceed regardless. They don’t get to select our itinerary or talk programme.” 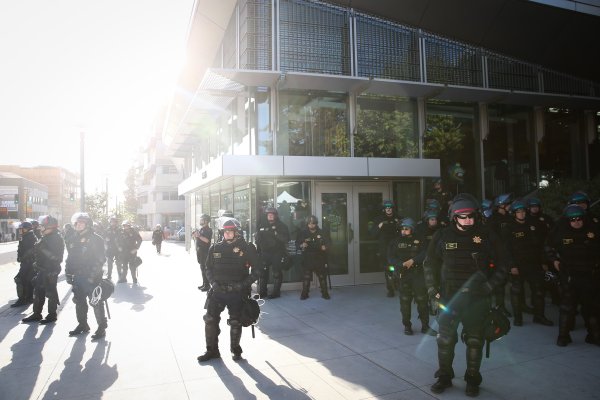 Conservative Firebrand Tests the Mood at Berkeley
Next Up: Editor's Pick