The NHL Is Not Allowing Players to Compete in the 2018 Winter Olympics. Here's What to Know

The National Hockey League chose not to participate in the 2018 Winter Olympics in PyeongChang, South Korea, which means some of the world’s greatest hockey players, including Alex Ovechkin and Sidney Crosby, were not allowed at the Games. The NHL decided in 2017 not to give its players a break during the 2017-18 season to compete for Team USA and other countries.

The move puts an end to the NHL’s streak of sending its players to the Winter Olympics for the past five Games. The NHL’s April 2017 decision left the U.S. to form a team of NCAA college athletes, European-based players and professionals competing in other leagues outside of the NHL. Other countries that also would have relied on talent from the NHL had to make other plans as well.

Without the NHL’s participation, Team USA released its Winter Olympic men’s ice hockey roster in January. The team includes captain Brian Gionta, who played for the Buffalo Sabres in the NHL until 2017, and a number of other former NHL players, Kontinental Hockey League players and some college athletes. Gionta was the top scoring athlete for Team USA at the 2006 Winter Olympic Games. In its Olympics debut, the team suffered a 3-2 overtime loss against Slovenia. Since it was a preliminary game, Team USA has a chance to redeem itself against Slovakia on Friday — or 10:10 p.m. ET on Thursday — and against the Olympic Athletes from Russia on Saturday. Meanwhile, the NHL is continuing its season as usual, with games running throughout the Olympics.

Here’s what you need to know about why the NHL chose not to compete:

Why is the NHL not going to the Olympics?

The NHL’s decision to pull out of the 2018 Winter Olympics came as a result of a series of disputes between the league and the International Olympic Committee (IOC) over the costs incurred by NHL athletes and who would cover them. The IOC had paid for the travel, insurance, accommodations and other costs for NHL players but refused to continue to do so for 2018.

When the IOC announced it would not pay these costs any longer, the International Ice Hockey Federation had offered to pay up to $20 million for the costs and insurance for NHL players in an attempt to bring them to the 2018 games. But that effort did not work, as costs were just a portion of the NHL’s concerns with its participation. Top athletes who go to the Olympics in the middle of the NHL season could get injured, which could affect the outcome of the hockey season, the NHL said.

Ahead of the 1998 Winter Olympics, the IOC and NHL agreed on a deal that would bring NHL players to the Games with their costs and insurance covered by the IOC. The IOC decided to stop covering those costs, since the IOC does not do so for other professional sports leagues like the National Basketball Association.

“The IOC, which distributes 90 per cent of its revenue for the development of sport in the world, obviously cannot treat a national commercial league better than not-for-profit International Sports Federations which are developing sport globally,” the IOC said in a statement.

Covering insurance was an obstacle for the IOC; insurance for NHL players cost the organization $7 million during the 2014 Winter Olympics in Sochi, Russia, according to the New York Times.

Participating in the Olympics is also more of a hassle for the NHL than for other professional sports leagues. In the last few competitions, the NHL took a three-week break in its season to accommodate the athletes choosing to compete for their countries. Other professional sports leagues like the National Basketball Association do not have to make the same break in a season, since Olympic basketball events are in the off-season in the summer.

What do NHL players think?

The National Hockey League Players’ Association put out a strong statement against the decision in April.

“The players are extraordinarily disappointed and adamantly disagree with the NHL’s shortsighted decision not to continue our participation in the Olympics,” the statement read. “Any sort of inconvenience the Olympics may cause to next season’s schedule is a small price to pay compared to the opportunity to showcase our game and our greatest players on this enormous international stage.”

Washington Capitals star Alex Ovechkin had said he would leave his team to play for Russia because of the ban. However, he has since said he would stay with the NHL this season.

A number of other NHL players have expressed frustration with the league’s decision to pull from the Olympics, according to interviews conducted by ESPN and other news outlets. When asked by ESPN what they would change about the game and why, several NHL athletes said they would allow players to go to the Olympics.

“Obviously we all dream of winning a Stanley Cup, and then the next is literally right there: winning a gold medal for your country,” Mark Scheifele, the star center for the Winnipeg Jets, told ESPN.

Pittsburgh Penguins Capitan Sidney Crosby, who won Olympic gold medals with Team Canada in 2010 and 2014, told the Pittsburgh Post-Gazette he thought the decision was unfortunate.

“I’d love to be there,” Crosby told the Post-Gazette. “It’s a great experience for everyone involved. Everybody gets up for it. It’s too bad that we’re not going.”

Could the U.S. still medal?

The historic “Miracle on Ice” for the 1980 Olympics, where a ragtag team of amateur American hockey players beat the powerhouse Soviet Union to win the gold medal in Lake Placid, N.Y., was the last time Team USA won gold. That was before the International Olympic Committee struck a deal with the NHL to include its best players in Olympic competition, starting with the 1998 Olympic Games.

“We expect to compete for a medal, and this will be no different,” said Tony Granato, the Team USA coach for the Olympics, according to the Los Angeles Times.

Could the NHL participate in the 2022 Olympics? 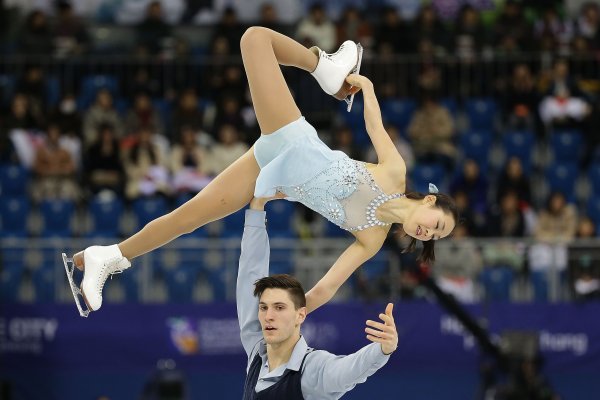 Everything You Need to Know About the 2018 Winter Olympics
Next Up: Editor's Pick