President Trump will give his first address to the United Nations Tuesday, an organization with which he has a bit of a controversial history.

As a candidate and a President, Trump has often espoused an “America First” policy that doesn’t always align neatly with the values of international cooperation that define the U.N. At one point during his campaign, he even decried the organization’s “utter weakness and incompetence.” The criticism only continued after he was elected, with Trump characterizing it on Twitter as a “club for people to get together, talk and have a good time.”

But the White House said Monday that while Trump will emphasize the values that make America unique, he will also stress the need for international cooperation, particularly when it comes to addressing issues like terrorism and the nuclear capacities of North Korea and Iran, both of which are expected to factor prominently into the speech.

Here’s a look at what we know about the content of Tuesday’s address.

When Trump visited Saudi Arabia in May, he delivered a speech at a summit where he urged Muslim nations to purge the extremists within the religion, and argued that good will ultimately prevail over evil. His remarks were a deviation from his past rhetoric, where he has blamed Islam as a whole for terrorism. But his speech in Warsaw, Poland, six weeks later had a decidedly different tone, emphasizing the need to preserve Western civilization and values in an era fraught with terrorism. His upcoming speech at the U.N., according to the White House, will contain aspects of both of these speeches. “This speech sort of continues, and does continue, that procession, and in front of the United Nations explains both a vision for burden-sharing among nations towards shared goals as at the same time a defense of our civilizational values and what makes us special,” a senior administration official said on a briefing call with reporters Monday.

The White House said that the speech will focus on both Iran and North Korea, emphasizing the role all countries need to play in taming these countries’ nuclear ambitions, particularly in regards to North Korea. The President is also expected to address Venezuela, which is currently embroiled in economic and political turmoil. But the Administration declined to provide specifics about whether the speech will contain policy prescriptions and did not respond to several questions about whether Trump will mention Russia.

When pressed for specifics about what Trump would say about Iran, the administration official said he will emphasize the gulf between the country’s leadership and the dissatisfaction of the country’s citizens.”One of the strategic implications of the speech is to point out that one of the greatest threats to the endurance of the status quo in Iran is the Iranian people themselves,”the official explained.

On Monday, President Trump met with Israeli Prime Minister Benjamin Netanyahu, who is an avid opponent of the 2015 Iranian nuclear deal. When asked by reporters if the U.S. would withdraw from the deal, Trump only replied, “you’ll be seeing very soon.”

Although promoting an “America First” policy — which places a priority on promoting domestic progress — may seem incompatible with international cooperation, the White House insists that the two actually go hand in hand, and that Trump will expand upon this connection in his speech. By delineating the benefits of an America First policy, the White House says, Trump is emphasizing the importance of sovereignty, which is a crucial ingredient for successful international cooperation. “What the President is doing is explaining how the principle of America First is not only consistent with the goal of international cooperation, but a rational basis for every country to engage in cooperation, because all countries that are sovereign put the needs of their own citizens first, and therefore countries that confront, as I said before, common dangers, common threats, common opportunities ought to be able to cooperate together as a coalition of strong, free, and independent nations to confront these shared dangers,” said the administration official. 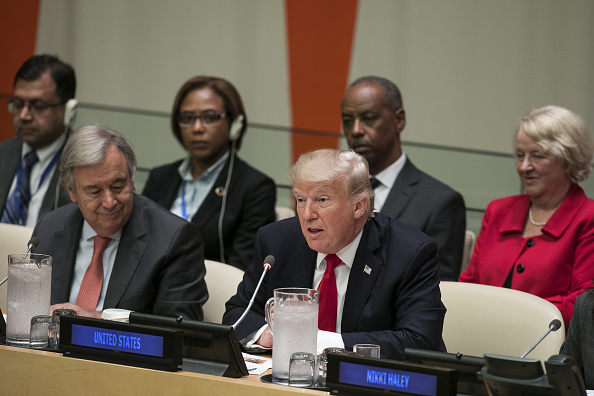 Here Are All the Times Donald Trump Bashed the United Nations Before Speaking There
Next Up: Editor's Pick