50 Years Ago This Week: 'Individuals Marry, Not Races'

Despite the best efforts of the bride and groom and their families, a wedding that all involved had tried to keep private was this week’s cover story — and it was national news for good reason.

The two parties in question were Margaret Elizabeth “Peggy” Rusk and Guy Gibson Smith. She was the one daughter of U.S. Secretary of State Dean Rusk, and a studious 18-year-old enrolled at Stanford. He was a 22-year-old NASA employee whom she had met when they were both horse-loving Washington teenagers. More to the point, he was black, and she was not.

As TIME noted, that fact meant that their wedding — coming very shortly after the Supreme Court struck down laws that banned such unions — was “social history rather than society-page fare.” And, even more than the wedding itself, the story explained, the reaction (or lack thereof) was an important indicator of the national mood:

Though the State Department received a reported couple of hundred nasty letters, and many Rusk family members did not attend the wedding, generally it was acknowledged that the marriage was far less controversial than it would have been just a few years earlier. In fact, one of the more notable reactions came from liberals who denounced Rusk’s Vietnam policies and now found themselves having to stand up for him.

For many people, the news was best summed up by Martin Luther King Jr.’s take on the wedding: “Individuals marry, not races.”

Hurricane forecast: As Hurricane Beulah rampaged through Texas, the magazine noted that the death toll was relatively low compared to other serious natural disasters of decades past. Credit was given to technological improvements that allowed Americans to better predict where and when the hurricane would hit, and to communicate about it. The tragic evidence for that argument could be seen in the Caribbean, where there was inferior hurricane monitoring and dozens of lives had been lost to the same storm.

Where’s Che? For more than two years, Che Guevara had been hiding from the public eye, “reported executed by Castro, killed in the Dominican Republic’s 1965 civil war and fostering guerrilla warfare in half a dozen Latin American countries.” Now, however, Bolivian officials believed they had solid evidence he was within their borders, and that they were close to tracking him down.

On the hunt: Though conventional wisdom held that hunters of the 1960s had missed the glory days of American game — the times when the buffalo roamed, and so on — in fact the modern hunter had plenty to work with. Species like deer had responded positively to the shrinking wilderness (for a variety of reasons, with future problematic consequences), and Pennsylvania, for example, had a larger deer population than it had had when the state was founded.

Legalization: As marijuana use became more common in the United States, smokers and officials alike were beginning to wonder whether it made more sense to treat the drug like other illicit substances or like alcohol, the consumption of which was considered a private matter. Though it seemed very unlikely that legalization would come any time soon, even government drug enforcers were willing to say that existing penalties for usage were stricter than necessary.

Great vintage ad: This two-page spread is actually an ad for Illinois Bell Telephone, encouraging reader interest in the state in which the company did business, but it’s also a fascinating interview with author Gwendolyn Brooks about writing, race and the city of Chicago.

Coming up next week: Under Fire in Vietnam 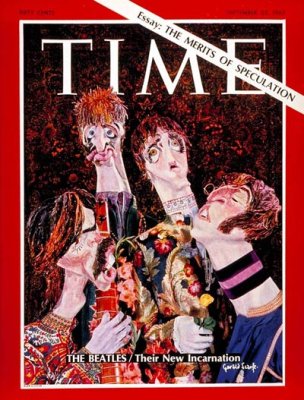 50 Years Ago This Week: The Beatles Change the World
Next Up: Editor's Pick