Plainclothes Officers Arrested Immigrants at a Courthouse. Can They Do That?

An Immigration and Customs Enforcement (ICE) officer guards a group of immigrations at a facility in Raymondsville, Texas, in 2008.
JOSE CABEZAS—AFP/Getty Images
By Maya Rhodan

Representatives of Immigration and Customs Enforcement say that the arrests of undocumented immigrants last week by plainclothes officers who did not identify themselves to bystanders outside a Brooklyn courthouse were allowed under current policy.

Under the Trump Administration, arrests at courthouses have become a common occurrence, much to the chagrin of immigration attorneys and immigrant rights advocates.

But the arrests last week gained attention after a defense lawyer tweeted about the plainclothes officers and a journalist who came to the courthouse reported that they refused to identify themselves.

In a statement, Immigration and Customs Enforcement spokeswoman Rachel Yong Yow said the four individuals who were arrested were members of or affiliated with a gang and had all pending criminal charges, adding that “courthouse visitors are typically screened upon entry, making arrests inside such facilities far safer for everyone involved.”

Under current policy, immigration officers are directed to avoid enforcement activities at locations that are deemed sensitive, including places of worship, schools, and hospitals, but courthouses are not included on the list. According to ICE, officers only carry out courthouse arrests after they’ve exhausted other options and those they target are typically foreign nationals with prior criminal convictions or pending charges or are threats to public safety.

The New York State Unified Court System issued guidelines in April on how law enforcement activities can be carried out in courthouses; they are required to check in, judges are to be notified, and officers cannot make arrests in courtrooms, except under “extraordinary circumstances.”

Lucian Chalfen, the director of public information for the New York State Unified Court System, says the ICE officers were at the Brooklyn courthouse to speak with an Assistant District Attorney from the borough. After speaking with them, they left. Both ICE and Chalfen say the four arrests took place outside of the courthouse.

Slate reported that ICE officers did not identify themselves when they were asked by journalists on the scene, but they don’t necessarily have to. An ICE spokesperson tells TIME that officers determine the level of visibility they want to have in these situations after taking the conditions of their surroundings into account.

“In high visibility situations, ICE officers use several means to identify themselves including, but not limited to, wearing placards or clothing that clearly identifies them as immigration officers,” an ICE spokesperson told TIME via email. “However, in certain situations high visibility hinders or endangers safety and officers may decide not to broadcast their identity.”

Officers are required to identify themselves if they are interacting with them as a part of their official duties no matter what the situation is, however.

Former Acting ICE Director John Sandweg tells TIME that courthouse operations are a sensitive issue because of the chilling effect it could have on those who need court services. But once officers are on the premises, he says, it’s understandable that they may decide not to identify themselves under certain circumstances, since that could jeopardize an operation or put them at risk.

Lee Wang, a staff attorney at the Immigrant Defense Project, says the fact that the officers did not identify themselves to reporters aligns with reports she has heard from attorneys.

“The standard report that we get from attorneys that witness these arrests is that ICE refuses to say who they are, they refuse to identify themselves, they refuse to answer yes or no when asked directly whether or not they’re with ICE and they refuse to provide any kind of paperwork from ICE showing that they have some type of administrative warrant for the arrest,” Wang says.

Under the Trump Administration, Immigration and Customs Enforcement officers have been granted more authority to carry out enforcement operations and arrests of undocumented immigrants. That freedom, which has been described by proponents as the unshackling of ICE agents, has raised concerns among immigrant advocates and officials who have said some arrests are having chilling effect on undocumented immigrants who need to interact with the justice system.

“I think it engenders mass fear. It makes it even more frightening for non-citizens to enter our courthouses because you don’t know who might be lurking in the corner,” Wang says.

Lawyers and law enforcement officials in states such as Colorado and Texas have raised concerns about the courthouse arrests, but the Trump Administration has shown no signs of backing away from the practice. When the Chief Justice of the Supreme Court of California wrote a letter to Attorney General Jeff Sessions and then-Homeland Security chief John Kelly asking the federal government to end the practice, but the Attorney General responded to her request by criticizing the state’s so-called sanctuary city policies. 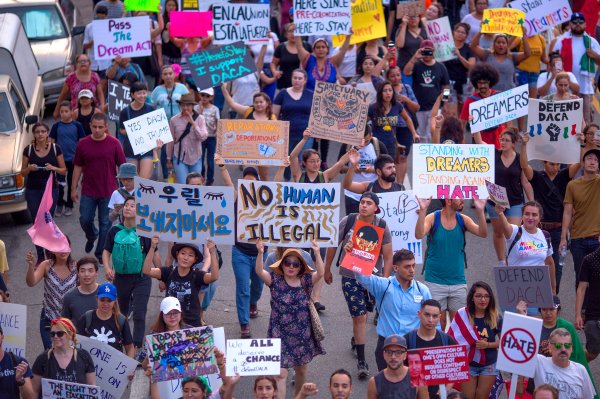