What the White House Bathrooms Taught Me About Power

Ecco
Ideas
By David Litt
Litt, a former senior speechwriter for President Barack Obama, is the author of Democracy in One Book or Less: How It Works, Why It Doesn't, and Why Fixing It Is Easier Than You Think and Thanks, Obama: My Hopey, Changey White House Years.

I never set out to become a connoisseur of White House men’s rooms. It just kind of happened. You move into a new apartment, get to know the area, and one day, to your surprise, you have strong feelings about every pizza place in the neighborhood. That’s what I went through, only with porcelain and liquid soap.

My favorite restroom was on the ground floor of the residence, next to the ceremonial library. The white marble floors and sinks radiated luxury, yet their muted, opaque quality kept them from showing off. “It’s honestly no big deal,” they seemed to say. “Some of us were just born pretty.” The overall effect was both stunningly impressive and refreshingly humble, the best of American democracy superimposed upon a WC.

West Wing men’s rooms offered unique charms of their own. For proximity to power, there was the stall tucked against the Roosevelt Room, just footsteps from the Oval. For retro quirkiness, there was the restroom across from Valerie Jarrett’s office. Urinals there were large and basinlike, like bathtubs sawed in half. (Even stranger, they flushed via bulky foot pedals placed twelve inches from the floor.) At ground level, the bathroom near Jon Favreau’s office boasted the building’s only shoe-polishing machine, the kind that looks like two Muppet scalps attached to opposite ends of a stick.

Not surprisingly, the facilities in the EEOB were less distinguished. If anything, their defining feature was a trigger-happy automatic flush. I won’t go into too much detail. All I’ll say is that I was the frequent victim of an impromptu bidet.

Yet despite these shortcomings, when it came to personal significance, no restroom could match the one in the southwest corner of the EEOB’s ground floor. This was because of something unforgettable (in advance, don’t worry, not gross) that happened six months after I started my new job.

It was a special time. I could finally navigate my surroundings, but the novelty of the building had yet to fade. Even the most routine pee break glowed with history. Descending a spiral staircase to the ground floor, I remembered that FDR had worked here during the 1910s. That was before polio claimed his mobility, and I imagined his shoes clicking and clacking on the steps. The EEOB was also home to the vice president’s ceremonial office. Tugging on the engraved metal knob of the men’s room door, I wondered if Nixon or Johnson had ever strained against its weight.

Then I entered the bathroom, and found the sole urinal occupied by someone in a bulletproof vest. This too was a kind of wonder. For the vast majority of my twenty-four years, I would have been stunned to see a real-life Secret Service agent. Diving in front of bullets. Driving through red lights. Sniping bad guys from rooftops. They were as mythical as X-Men, and no less devoted to saving the day.

Now, after a few months at the White House, I still thought of Secret Service agents as heroes. But they were also people I peed next to. Not wanting to wait for the agent at the urinal, I scooted past him and opened the door to the stall. Stepping inside, I closed the latch behind me and turned around.

And that’s when I saw it: a fillet of grilled salmon, unblemished by a single bite mark, sitting in the toilet bowl.

I have. And because I have, I can assure you the experience raises more questions than it answers. For example, why aren’t there any side dishes? What would happen if I flush?

But those questions would come up anywhere. As I began the next phase of my inquiry, the search for suspects, a simple piece of fish took on far greater meaning. I knew it was an inside job — Ike’s was serving salmon that day — but beyond that, I was stumped. The National Security Council offices were only three floors above me. Was someone there really so woefully incompetent? Or maybe it was the econ team. Had a person responsible for billions in federal grant money simply snapped? And let’s not forget the man in the bulletproof vest I had spotted just feet from the crime scene. Could a Secret Service agent have gone rogue?

This is an excerpt from Thanks, Obama: My Hopey, Changey White House Years by David Litt. 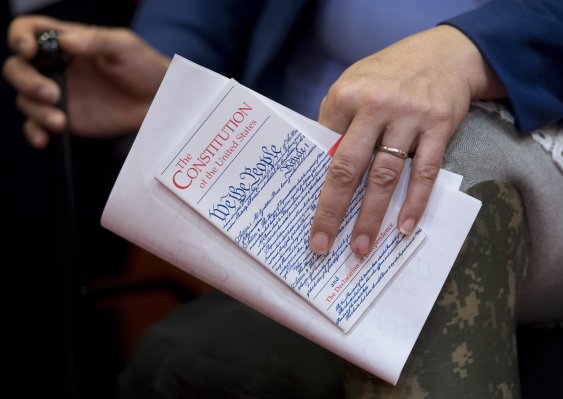 A True Constitutional Crisis Is Rare in American History. Here's Why
Next Up: Editor's Pick