There was no shortage of jokes about President Donald Trump throughout the course of the 2017 Emmys — especially from host Stephen Colbert — but one person who apparently wasn’t laughing was Kellyanne Conway. During a Monday appearance on Fox & Friends, the White House counselor criticized the award show’s attendees for attacking Trump.

“They got plucked and polished and waxed and some of them didn’t eat for two months, and all for what? To sound the same?” she said. “They have a right to speak but…if you’re an American and you’re tuning in to watch your favorite actors and actresses and shows — and I used to do it routinely as a kid. ‘Who’s going to win? Oh, she lost? I love her show.’ There is very little of that.”

Conway went on to say that she doesn’t believe viewers of the Emmys, Miss America pageant and sports appreciate being subjected to political commentary.

“It looks like the ratings are suffering,” she said. “It looks like America is responding by tuning out. Because they want you to stick to your knitting. They want you to, I guess in this case, read the stuff other people write for you. So they’re welcome to their opinion but how does it really fit? I get that feeling of the old Sesame Street song: ‘One of these things does not belong here.’ It was on and on and on. I think it’s this culture of sameness that I talk about. Look at the media research center NewsBusters’ analysis recently, where 91 percent — 91 percent! — of the coverage about President Trump in the summer was negative. It felt the same last night watching it.”

She did, however, seem to enjoy Kate McKinnon’s win. “I am so happy Kate McKinnon was able to get her Emmy,” Conway, who McKinnon impersonated last season joked. “I know she thanked Hillary Clinton, but it had to be much more fun to play me.” 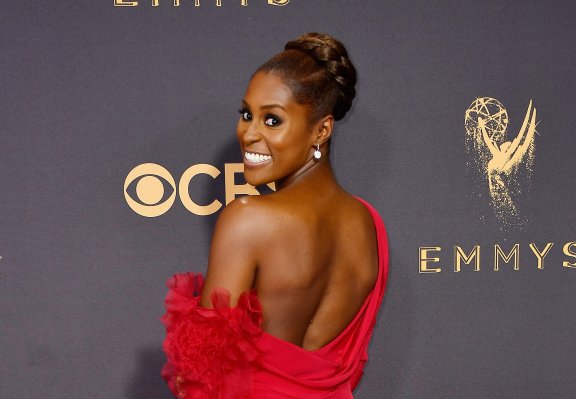 Insecure's Issa Rae Was 'Rooting For Everyone Black' at the 2017 Emmys
Next Up: Editor's Pick