TV Is Changing for the Better. Just Look at the Records Broken at the 2017 Emmys

When Nicole Kidman and Reese Witherspoon took the stage on Sunday night to accept the Best Miniseries Emmy for Big Little Lies, they had a mandate for Hollywood: Embrace female stories. “This is a friendship that created opportunities out of our frustration,” Kidman said. “So now: more great roles for women.”

It’s long been a complaint in Hollywood that most stories on the big and small screen are about white men, told from a white man’s perspective. Kidman and Witherspoon are two of the most powerful actors in Hollywood. If they can’t find challenging work, there’s a problem. But this year’s ceremony signaled a turn, if not a sea change. Milestones were reached. Records were set. Women and people of color won major awards for acting, writing and directing.

And they won these awards for work that dealt explicitly with issues of identity. Donald Glover, who won Best Acting and Best Directing for a Comedy Series for his show Atlanta, has said that he wanted to use his series to share the black experience with the world. Lena Waithe, who won Best Writing along with Aziz Ansari for Master of None, took home the trophy for an episode about her character coming out to her family. Charlie Brooker won an award for writing an episode of Black Mirror about a romance between two women that doesn’t end in doom and gloom. Riz Ahmed won Best Actor in a Miniseries for his work The Night Of, a show that examined the American justice system and Islamophobia. And Sterling K. Brown, who plays an adopted black son exploring his identity on family drama This Is Us, lovingly referred to his castmates as the “best white TV family that a brother has ever had.”

Stories that focus on women’s lives are often dismissed by the powers that be as “not universal” or “too domestic. But this year’s Emmys deemed women’s stories worthy. Waithe’s Master of None episode focused on three generations of black women. Big Little Lies dealt with domestic violence and female friendship. Veep, which won Best Comedy and an acting award for star Julia Louis-Dreyfus, continues to skewer the way women are treated in politics. And, of course, Best Drama winner The Handmaid’s Tale rendered a dystopian future in which women are stripped of their rights.

The Atlanta scribe took home gold for the episode “B.A.N.,” in which a rapper objects to his P.C. critics. During his acceptance speech, Glover called out Trump: “I want to thank Trump for making black people No. 1 on the most oppressed list.” He went on to win best actor in a comedy series for his work on the show as well.

Master of None creators Aziz Ansari and Alan Wang recruited one of the show’s breakout stars, Waithe, to write an episode based on her own experience coming out to her family.

“I love you all and last but certainly not least my LGBTQIA family,” Waithe said during her acceptance speech. “I see each and every one of you. The things that make us different, those are our superpowers — every day when you walk out the door and put on your imaginary cape and go out there and conquer the world because the world would not be as beautiful as it is if we weren’t in it.”

Riz Ahmed: The first man of Asian descent to win an acting prize

Ahmed, whose parents emigrated from Pakistan to England before he was born, won the award for best actor in a miniseries on Sunday for his role on HBO’s The Night Of and became the first male actor of Asian heritage to win an acting award in Emmys history.

The Night Of dealt directly with issues of racism against Muslims. “If this show has [shined] a light on some of the prejudice in our society, Islamophobia, some of the injustice in our justice system, then maybe that’s something,” Ahmed said during his speech.

With his win, Brown became just the fourth black man to take home the Emmy for Best Actor in a Drama. The last time a black actor won the Emmy was 19 years ago when Andre Braugher took home the trophy for Homicide.

Brown acknowledged Braugher’s legacy during his acceptance speech: “I just want to say Mr. Braugher, whether at Stanford University or on this Emmy stage it is my supreme honor to follow in your steps.”

Julia Louis-Dreyfus: Tied for most acting wins at the Emmys in history

The Veep star is officially Emmys royalty. She won a sixth consecutive victory for her portrayal of a put-upon politician in HBO’s Veep, and her eighth overall. The win ties her with Cloris Leachman for the most acting awards. She also now holds the title of most Emmys won for playing the same character — the first female president of the United States.

Reed Morano: First woman to win for directing in 22 years

The last time a woman won an Emmy was directing was in 1995, when Mimi Leder took home the prize for her work on ER. Morano won for directing the pilot of The Handmaid’s Tale, “Offred.”

Hulu: The first streaming service to win an Emmy for a best series

Though Netflix’s House of Cards, Amazon’s Transparent and a handful of other streaming shows have previously been nominated for Best Drama or Best Comedy, Hulu’s The Handmaid’s Tale became the first streaming show to win a top prize when it took home Best Drama. This was a huge coup for Hulu, which had never even gotten a show nominated before this year.

It also was a signal of what ignited debate this year: A series about a dystopian society in which women are reduced to sex slaves became one of the most winning shows of the night. Actors Ann Dowd, Elisabeth Moss and Alexis Bledel also won Emmys for their work on the show. 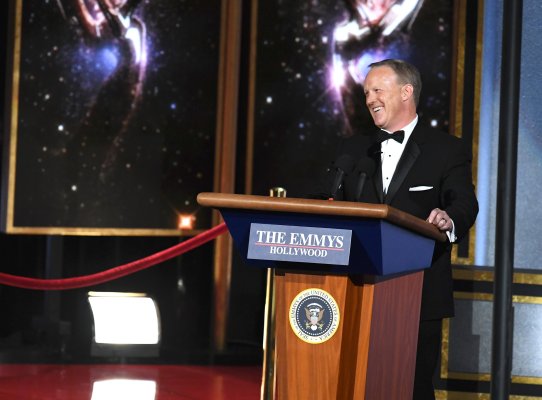