Why Some People Are Mad About Sean Spicer's Emmys Appearance

Sean Spicer shocked the entertainment world and angered some people when he made an unexpected appearance at Sunday night’s Emmy Awards.

Spicer, formerly President Donald Trump’s press secretary, walked on stage with a podium to deliver a one-line joke. “This will be the largest audience to witness an Emmys, period — both in person and around the world,” Spicer said.

The quip was a reference to false claims he once made regarding the viewership of Trump’s inauguration. But some observers criticized the gag as making light of Spicer’s controversial time at the White House.

Many celebrities, including Veep’s Anna Chumskly and Modern Family stars Sarah Hyland and Julie Bowen, were visibly amused by the surprise appearance. But some social media users denounced Spicer’s cameo.

“I’m not ready to laugh ‘with’ Sean Spicer,” actor Zach Braff tweeted. “I think he is an evil, opportunistic liar that hurt our country.”

Others shared a similar sentiment.

After the show, a smiling Spicer told Entertainment Weekly he was pleased with his appearance even though the audience was “not exactly a Republican crowd.”

“Everyone has been very gracious,” Spicer said. “Life outside of the White House has been shockingly enjoyable.” 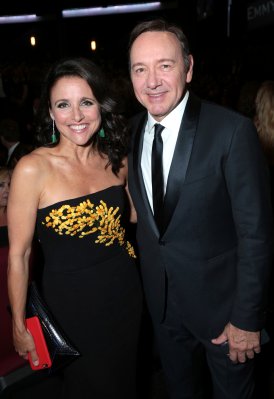 Kevin Spacey Going Full Dad at the Emmys Is Your New Favorite Meme
Next Up: Editor's Pick