Celebrities were not prepared for the Spice.

Curious about how many people were watching the Emmys, host Stephen Colbert called in the big guns during his monologue. “Sean, do you know?” he asked. That’s when former White House Press Secretary Sean Spicer rolled in to assist him with a report on the crowd.

The surprise guest arrived behind a podium like the one in the White House press briefing room. “This will be the largest audience to witness an Emmys, period. Both in person and around the world,” he declared with firm conviction.

He was making fun of his own unwavering assertion about the viewership of Trump’s January inauguration. At the sight of him, several celebrities — most notably Melissa McCarthy, who famously played Spicer on Saturday Night Live — had strong reactions.

Anna Chumskly of Veep had the most meme-worthy natural reaction. Consider it whenever you need to communicate a combination of awe and disbelief.

Perhaps knowing that all eyes would be on her, Melissa McCarthy, who won an Emmy for her SNL impression of Spicer, kept it cool.

Watch the moment below. 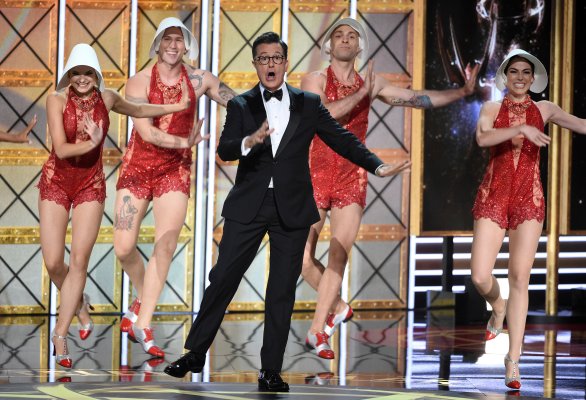 Every Political Moment at the 2017 Emmy Awards
Next Up: Editor's Pick