Sterling K. Brown accepts Outstanding Lead Actor in a Drama Series for "This Is Us" onstage during the 69th Annual Primetime Emmy Awards at Microsoft Theater on September 17, 2017 in Los Angeles, California
Kevin Winter—Getty Images
By Eliana Dockterman

Sterling K. Brown became the first black man to win an Emmy for Best Actor in a Drama in 19 years on Sunday night. The This Is Us actor, who also won an Emmy last year for his turn on The People v. O.J. Simpson, delivered a powerful speech. He also dropped some geeky Mad Men references and honored Andre Braugher, the last black actor to win the award, before his microphone was cut off mid-speech.

“Before anything like this happened to your boy, I was a fan,” Brown began. “First, last, and always a fan. So, my fellow nominees, I’m a fan. I love y’all.

“This one right here, when I think about it, like, Walter White held this joint. Dick Whitman held this joint,” he said, admiring the golden Emmy in his hand and referencing the characters played by Bryan Cranston on Breaking Bad and Jon Hamm on Mad Men. “I may have lost some of y’all, but you know. Google it. And 19 years ago, Detective Frank Pembleton won this joint, as impeccably played by Andre Braugher. I just want to say whether it’s at Stanford or on this stage, it is my supreme honor to follow in your footsteps.”

Braugher, who currently stars on Brooklyn Nine-Nine, won the Best Actor in a Drama Emmy in 1998 for his role as Pembleton in Homicide: Life on the Street. Brown is just the fourth black actor to win the award. Bill Cosby won in 1966 and 1968 for I Spy, and James Earl Jones took home the statue in 1991 for Gabriel’s Fire.

Brown went on to honor his co-stars, Mandy Moore, Milo Ventimiglia, Justin Hartley and Chrissy Metz, who play his adoptive family on This Is Us. “You are the best white TV family that a brother has ever had,” he said. “Better than Mr. Drummond. Better than them white folks that raised Webster. I love you.”

He then turned to his TV wife: “Susan Kelechi Watson, it is my pleasure to rep black love with you sister. Let’s keep doing it like Martin and Gina.”

He then thanked the actor who plays his biological father on the show, Ron Cephas Jones. “You just have to show up, and the work is already there, brother.”

Brown began to go on about the writers, producers and directors of the show when the band started playing. He tried to keep talking but his microphone was cut off.

Brown did get a chance to share the end of his speech with the press backstage. He thanked This Is Us creator Dan Fogelman, who he said is “trying to make [America] the best it’s ever been.” And finally, he thanked his wife and two sons. “They cut me off before I got to thank my wife, man,” he said, before sharing these words with her: “You make my life worth living.” 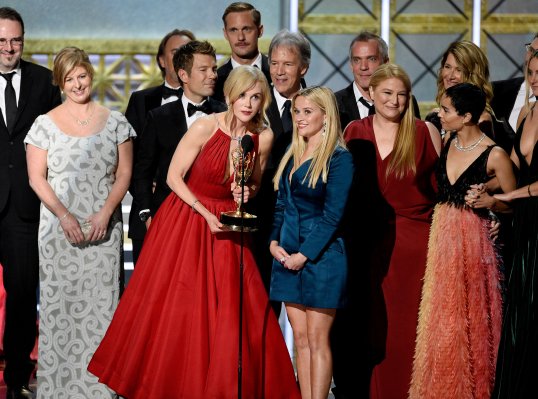