The Trump Administration’s former White House Press Secretary Sean Spicer just shocked a lot of people by showing up to help out one of the President’s biggest critics: Stephen Colbert.

The Emmy host needed someone to assess just how many people were tuning into the award show. So who better than Washington’s old resident people counter “Spicy”?

Spicer rolled out on his old podium to recreate that time he defended Trump’s inauguration crowd size. “This will the largest audience to witness an Emmys period. Both in person and around the world,” he declared with more certitude than he ever possessed.

He was of course poking fun at his brash assertion of questionable truth that would continue to make him perfect fodder for online critics. (From his very first statement, his definitive closer “period” was particularly useful for the internet to joke about untrue statements.)

The internet was quick to capture the reactions in the room, including the one from Melissa McCarthy whose Spicer impression on Saturday Night Live scored her an Emmy this year.

Not everyone loved seeing Spicer holding court at his new “Emmys Hollywood” podium for his awards show debut.

But there’s no arguing it was unexpected.

Colbert’s political satire of Trump has helped The Late Show earn record ratings, prompting criticism from his target, the President himself. But post-White House, Spicer has been finding an outlet on late night television. He recently defended his crowd size comments on Jimmy Kimmel Live!. 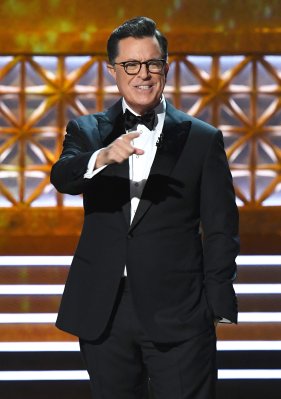 All of the Times Stephen Colbert Went After Donald Trump in His Emmys Monologue
Next Up: Editor's Pick