‘I Have Been Afraid of Speaking Out.’ Amber Tamblyn’s Powerful Reaction to Sexual Harassment in Hollywood

Amber Tamblyn has had enough of the sexual harassment, abuse and assault that has plagued Hollywood.

In a powerful op-ed published in the New York Times, Tamblyn spoke out about the difficulty women face when they are questioned about their experiences of harassment and assault. The story was published after actor James Woods called her a liar for recounting a story of when he tried to pick her up when she was 16 years old.

“I have been afraid of speaking out or asking things of men in positions of power for years,” Tamblyn, now 34, wrote. “What I have experienced as an actress working in a business whose business is to objectify women is frightening. It is the deep end of a pool where I cannot swim. It is a famous man telling you that you are a liar for what you have remembered. For what you must have misremembered, unless you have proof.”

Earlier this week, Woods took to Twitter to criticize the premise of a new film, Call Me by Your Name, starring Armie Harmer that depicts a gay relationship between a 17-year-old and a 24-year-old. Harmer responded to Woods, highlighting his hypocrisy by pointing to a relationship Woods had with a 19-year-old when he was 60.

And then Tamblyn responded with her own experience.

“In an instant, I was reminded of a memory from when I was 16,” Tamblyn wrote in the Times. “Mr. Woods attempted to pick me and a friend up when we were at Mel’s diner in Hollywood, seeing if we wanted to go to Las Vegas with him that very night. I informed him of my age, to which he said, ‘Even better.’ I told this story publicly as a way to back up the claim that Mr. Woods was, indeed, a hypocrite. Mr. Woods called my account a lie.”

In the op-ed, Tamblyn detailed an experience she had as a young actress when a crew member from the set of a television show kept coming to her apartment “unannounced” and sitting in her trailer when she wasn’t there. When she brought up the issue to the producer of the show, he said, “Well, there are two sides to every story.”

“Mr. Woods’s accusation that I was lying sent me back to that day in that producer’s office, and back to all the days I’ve spent in the offices of men; of feeling unsure, uneasy, questioned and disbelieved, no matter the conversation,” Tamblyn wrote.

“The women I know, myself included, are done, though, playing the credentials game,” Tamblyn continued. “We are learning that the more we open our mouths, the more we become a choir. And the more we are a choir, the more the tune is forced to change.” 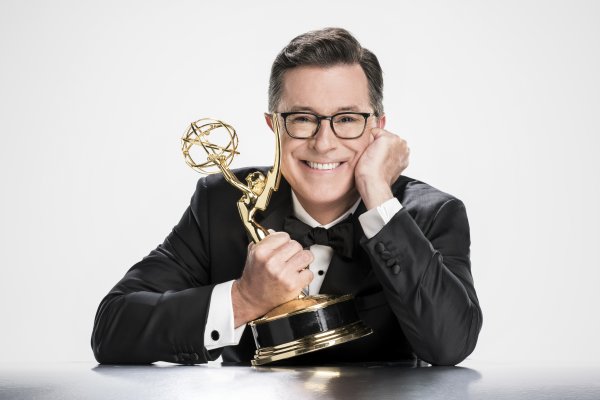 Emmys Host Stephen Colbert: President Trump Is the ‘Biggest TV Star of the Year’
Next Up: Editor's Pick