The hunt for the black box of Malaysia Airlines Flight 370 began in earnest Friday, despite no debris having been discovered in the southern Indian Ocean where the missing Boeing 777 is thought to have crashed.

The British ship H.M.S. Echo and Australia’s Ocean Shield will deploy submerged pinger locators and converge on each other along a single 155-mile (250 km) corridor, in the hope of detecting any signal from the data recorder lodged toward the errant plane’s tail. An unmanned submarine is also being readied for action.

“The area of highest probability as to where the aircraft might have entered the water is the area where the underwater search will commence,” former Australian defense force chief Angus Houston, in charge of coordinating efforts, told reporters in Perth.

MH 370 departed from Kuala Lumpur for Beijing at 12:41 a.m. local time on March 8, but lost contact less than an hour later. The last confirmed transponder reading was over the Gulf of Thailand, after which the 200-ton jet apparently performed a U-turn and was tracked over northern Malaysia by Malaysian and Thai military radar.

Thereafter, six hourly data pings indicate the 11-year-old, Rolls-Royce-powered aircraft traveled south from the Strait of Malacca toward the southern Indian Ocean, say investigators, with a final partial ping at 8:19 a.m., possibly indicating when the fuel ran out.

The latest search area is based upon this last clue, and experts have been working with simulators to estimate where the plane may have ended up, despite the absence of very little other information such as speed, altitude or engine performance.

The lack of any confirmed debris combined with the black box’s rapidly depleting battery leaves precious few options. The estimated life of the power supply is 30 days, or April 7.

“After the battery life expires, you move on to a different phase of the investigation, which will use underwater radar and scanning capabilities,” Michael Daniel, an international aviation-safety consultant who spent over three decades at the Federal Aviation Administration, tells TIME.

“It makes it far more difficult as you don’t have anything transmitting underwater. Then you must just scan the seabed for wreckage with sonar and radar, where cliffs and rocks can mask debris. That’s what they did to find Air France Flight 447.”

The case of that flight, which crashed into the Atlantic en route from Rio de Janeiro to Paris in 2009, illustrates why Australian Prime Minister Tony Abbott deemed the current search “the most difficult in human history.”

Typically when a flight crashes, investigators know its flight path and can trace this to the wreckage. With Flight 447, bodies, and two debris fields 50 miles (80 km) apart, were found within 24 hours — but even so the black box was not recovered until two years later.

As MH 370 was so drastically off course, there is no established flight path. And without any debris found, there’s no doubt that Friday’s resumed efforts represent a considerable leap of faith. Houston said on Friday that it is extremely unlikely more pinger locators could be found to join the two currently in service.

In addition, satellite imagery will continue to be scrutinized, despite none of the hundreds of objects so far flagged turning up any leads, and questions over the value of this information. Experts say it is extremely unlikely that remnants from the aircraft large enough to be distinguishable from general flotsam by satellite would still be buoyant, leaving life jackets and seat cushions as the only possible flotsam.

Malaysia’s police chief has said the saga is being treated as a criminal investigation, but officers have cleared all 227 passengers of possible involvement in hijacking, sabotage or suffering psychological problems sufficient to warrant continued investigation, leaving enquires to focus on the 10 crew and two pilots.

The Malaysian authorities have repeatedly come under fire for contradictory statements and the alleged withholding of information, especially from relatives of the 153 Chinese nationals aboard, but Houston attempted to quell these accusations Friday.

“I don’t think that anybody is withholding anything in terms of what needs to be done,” he said. “There is no problem with the supply of information.” 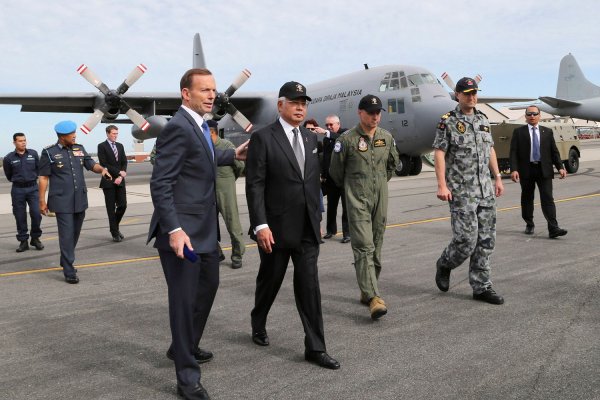 Hunt for MH370 Will Go On 'Till Hell Freezes Over'
Next Up: Editor's Pick