Actor and noted relatable human Jennifer Lawrence wants you to know that she is indeed, still relatable, by telling a wine-fueled anecdote about getting in a bar fight in Budapest during an appearance on Late Night With Seth Meyers.

The Mother! actor stopped by the show to drink wine with Meyers in hopes of minimizing the hangover she had from attending a movie premiere the night before. While she was there, however, she revealed that she got into a “real bar fight” while filming on location in Budapest after a fan responded rudely after she politely declined a selfie with him.

“I was drunk, which is rare,” Lawrence said with a chuckle. “This guy asked me for a selfie and I was like, ‘No. Thank you. No.’ He was like, ‘Please! My girlfriend will never believe me.’ My friend was like, ‘If your girlfriend won’t believe you then she’s not The One.'”

After asking the fan to go away, he had some less than savory words for her, which set into motion the bar fight.

“Something in me just snapped — but it couldn’t have been the alcohol,” she said. “I grabbed him, I took beers and I started dousing him, all over him.”

Lawrence didn’t stop there, however; she saw that the fan also had a suitcase and made quick work covering that in beer as well. 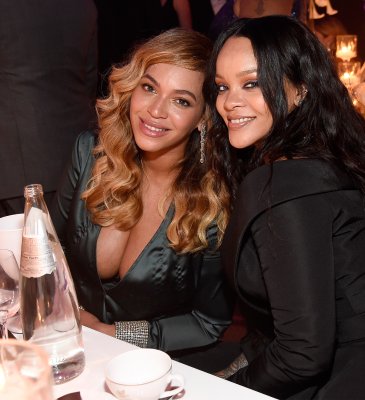 The Internet Can't Handle Rihanna & Beyoncé's Glam Night Out
Next Up: Editor's Pick