A house on fire in Gawduthar village, Maungdaw township, in the north of Rakhine state, Myanmar September 7, 2017.
Stringer—Reuters
By Joseph Hincks

Amnesty International says it has conclusive proof Myanmar is operating a coordinated and systematic campaign to drive out its Rohingya population, a 1.1 million strong Muslim minority that has suffered decades of persecution in the Buddhist country.

Analysis of active fire-detection data, satellite imagery, photographs and videos from the ground — as well as interviews with dozens of eye witnesses — reveals that security forces set more than 80 separate fires in the country’s troubled Rakhine State since fighting broke out on Aug. 25, according to an Amnesty press statement.

More than 370,000 Rohingya have fled into Bangladesh in less than three weeks, bringing with them stories of murder, rape, and burning villages at the hands of security forces. On September 7, about a dozen journalists on a government-controlled trip through Rakhine saw new fires burning in a village that had been abandoned by Rohingya.

“The evidence is irrefutable – the Myanmar security forces are setting northern Rakhine State ablaze in a targeted campaign to push the Rohingya people out of Myanmar,” Amnesty International’s Crisis Response Director Tirana Hassan said in the press statement. “Make no mistake: this is ethnic cleansing.”

Eyewitnesses interviewed by Amnesty consistently reported seeing soldiers, police, and vigilante groups systematically storming villages, shooting at those fleeing, and setting alight houses with petrol and shoulder-fired rocket launchers. In some cases, they said, local authorities had notified them in advance that their houses would be torched.

A Rohingya man who fled his home village in Maungdaw township described finding his friend dead after a morning attack by the Myanmar military. Later that day, security forces returned and opened fire anew. “When people fled, they burned the houses with bottles of petrol and rocket launchers,” the man told Amnesty. “The burning continued for three days. Now there are no homes in our area – all are burned completely,”

Myanmar authorities have denied the military is setting fire to villages, instead insisting that the Rohingya have set their own homes ablaze.

“The government’s attempts to shift the blame to the Rohingya population are blatant lies. Our investigation makes it crystal clear that its own security forces, along with vigilante mobs, are responsible for burning Rohingya homes,” said Hassan. 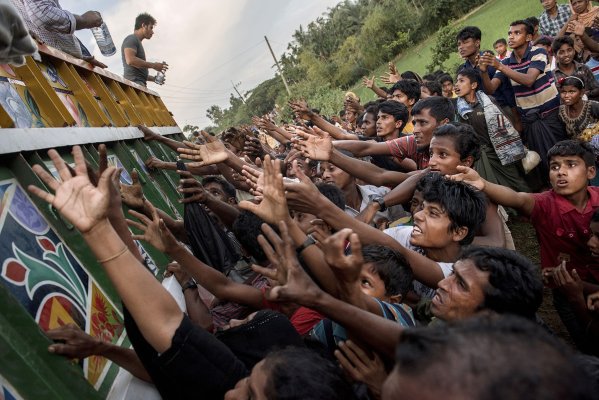 Top Catholic Official in Myanmar Speaks Out on Treatment of Rohingya Muslims
Next Up: Editor's Pick