By Charlie Campbell / Tokyo and Beijing

First came the threat, then the warning shot. On Friday morning, people in Japan were yet again sent scurrying for cover after a second North Korean missile in just three weeks was fired over its northern island of Hokkaido, triggering a series of SMS alerts, television broadcasts and loudspeaker announcements advising of an possible attack.

The launch is seen as direct retaliation for new U.N. sanctions spearheaded by Tokyo and Washington following Pyongyang’s sixth nuclear test on Sept. 3. Following the sanctions, Pyongyang said, “The four islands of the [Japanese] archipelago should be sunken into the sea by the nuclear bomb of Juche.” (Juche is the state’s ideology, a kind of socialist and ultra-nationalist self-reliance.)

The statement, attributed by state media to its ironically named Korea Asia-Pacific peace committee, added that the U.S. should be “beaten to death like a rabid dog.”

Such threats are becoming less idle by the day. Friday’s missile likely reached an altitude of about 480 mi. (770 km) and traveled some 2,300 mi. (3,700 km), according to South Korea’s military. The launch was considerably further than the Aug. 29 test and, notably, traveled far enough to reach the U.S. Pacific territory of Guam, which is 2,100 mi. (3,400 km) from Pyongyang.

Japan’s Chief Cabinet Secretary Yoshihide Suga called Friday’s test an “intolerable” act of provocation, though said that there was no evidence of missile fragments across Hokkaido.

The stated goal of North Korea’s escalating weapons tests is a nuclear-armed ballistic missile capable of striking the continental U.S. However, Japan is feeling the heat more than anyone. The 22 missiles Pyongyang has tested this year were all fired toward the nation of 126 million, which has the world’s third largest economy.

Considered an ancient foe by North Korea, owing to Tokyo’s annexing of the Korean peninsular in 1910 and abuses under colonial rule, the Japanese people increasingly feel they would be the first line of attack in the breakout of hostilities — not least because Japan hosts around 50,000 American troops.

“The U.S. bases are here to provide protection for Japan, but many Japanese are now thinking these bases are essentially bullseyes,” Prof. Jeffery Kingston, director of Asian Studies at Temple University in Japan, tells TIME.

In response, the Japanese public have been placed on high alert. Schools across the country have been told to conduct missile defense drills, and many local authorities are following suit, responding to the worries of their constituents who didn’t know what to do when the Aug. 29 drill sounded.

Although that meant many people were better prepared on Friday, the official guidelines of “duck and cover” are hardly reassuring for a people schooled from a young age on the horrors of Hiroshima and Nagasaki, and who are still mopping up after the calamitous Fukushima Nuclear Plant meltdown that followed an earthquake and tsunami in 2011.

In response to the deteriorating security situation, some Japanese have taken to installing emergency shelters in the homes or offices. Orders from the U.S. have spiked and domestic manufacturers are taking to ingenious adaptions to meet demand.

“Vastly more people have made inquires since the Aug. 29 missile test,” he told TIME earlier this week. 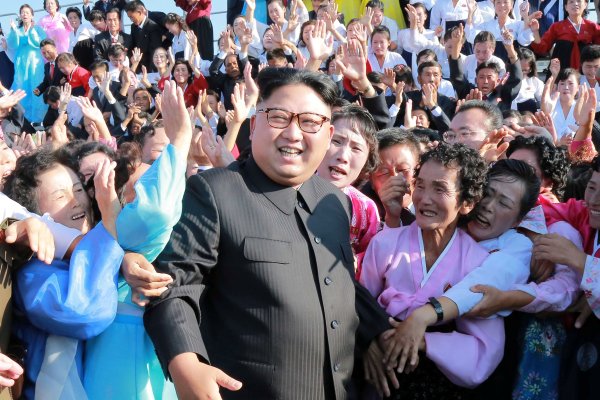