Those interested in buying the $999 the iPhone X are weighing what may be the most expensive smartphone purchase they’ve ever made. It’s not even close to being the priciest smartphone ever created: luxury brands like Vertu have been making phones that cost tens of thousands of dollars for years. But the arrival of the iPhone X and Samsung’s $930 Note 8 seem to mark the beginning of an era in which everyday smartphones are carrying a larger price tag than ever before.

Here’s a look at three cheaper Android devices you can purchase now if you want to save some money and can’t wait until the iPhone X’s Nov. 3 launch, including the Essential Phone, the Samsung Galaxy S8, and the LG G6.

What makes it similar to the iPhone X

The Essential phone, made by Android creator Andy Rubin, has a gorgeous edge-to-edge display with an even higher resolution than that of the iPhone X. (Apple’s new high-end smartphone has a 2,436 x 1,125 display resolution; the Essential phone’s is 2,560 x 1,312.)

Similarities between the two phones pretty much end there, but it’s worth noting that Apple and Essential have taken somewhat similar design approaches with their devices. Both phones have a cutout at the top of the screen for the front camera, although Apple’s is much wider since it includes additional sensors for facial recognition. At $699, the Essential phone is also about $300 cheaper than the $999 iPhone X, while also providing 128GB of storage space — that’s more than the entry level iPhone X, which includes 64GB.

What makes the Essential phone stand out is its simple software. It doesn’t include any “bloatware,” or extra apps and widgets from your carrier, making it feel like a fluid, blank slate you can completely customize yourself. There’s also a connector on the back of the phone for snapping on accessories, like Essential’s miniature 360-degree camera. The drawback, however, is that its camera falls behind those on competing phones, although Essential says it will improve the camera through software update over time.

What makes them similar to the iPhone X

With its gorgeous, nearly borderless OLED display, wireless charging, and facial recognition tech, Samsung’s flagship smartphones are the closest you’ll get to the iPhone X without actually buying one. Samsung’s Galaxy S8 and S8+ have screens made of curved glass that slightly folds over the device’s edges. At 5.8 inches, the Galaxy S8’s display is the same size as that of the iPhone X, while the Galaxy S8+’s 6.2-inch screen is slightly larger. The screens on Samsung’s phones also have a higher resolution (2,960 x 1,440) than the iPhone X.

The Galaxy S8 and S8+ can also recognize you by face, but unlike the iPhone X, they also offer fingerprint and iris authentication. They offer wireless charging and support standards put forth by the Wireless Power Consortium (WPM) and Power Matters Alliance (PMA), while the iPhone X only supports WPM accessories. In other words, since Samsung’s phones support both standards, they will likely be compatible with a broader range of charging accessories.

The Galaxy S8 and S8+ both come with Samsung’s Bixby virtual assistant, which can answer questions, help you navigate your phone, provide information about the world around you through its camera, and show content related to your habits and interests. The S8 and S8+’s 12-megapixel camera is also top-notch, capturing photos that offer rich contrast and colors.

What makes it similar to the iPhone X

Long before Apple, Samsung, or Essential unveiled new phones with gigantic screens, LG debuted the bezel-free G6. LG’s phone also has a nearly borderless 5.7-inch screen with a sharper resolution compared to Apple’s smartphone (2,880 x 1,440 versus the iPhone X’s 2,436 x 1,135 display). It also supports wireless charging like the iPhone X and Samsung’s Galaxy phones. LG’s phone comes with two rear-facing cameras: one standard and one wide angle, like the iPhone X and iPhone 8 Plus.

The LG G6 also comes with the Google Assistant, the same virtual helper found on the Google Home and other Android phones. The phone also includes a camera app with an interface that’s optimized for its larger screen called Square Cam, which divides the display in half to show you the shot you just captured immediately after hitting the shutter button. However, I found that rival phones were better at autofocusing when taking photos than LG’s. 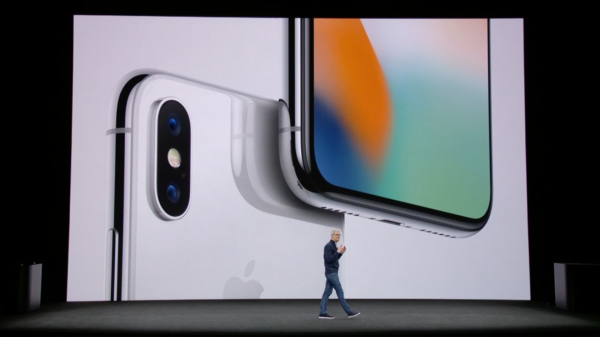 The Best Camera Features on Apple's New iPhone 8 and iPhone X
Next Up: Editor's Pick