While watching TV on Wednesday, the 36-year-old reality star stumbled upon on an interview with the Oscar-winning actress, who was explaining to E! News how Keeping Up with the Kardashians helped relieve her from the stress of filming mother!. And despite being one of Hollywood’s biggest celebrities, Kardashian West was left starstruck.

“OMG is this real?!” the mother of two wrote on Snapchat, filming Lawrence’s interview.

Lawrence’s comments to E! News were similar to the ones she made to Vogue in August, when she first revealed that the crew of her new thriller had made her a “Kardashian tent” where she could decompress between scenes.

“I had to go to a darker place than I’ve ever been in my life. I didn’t know if I’d be able to come out okay,” she said of the movie, directed by boyfriend Darren Aronofsky. “It was a tent that had pictures of the Kardashians and Keeping Up with the Kardashians playing on a loop — and gumballs.”

“My happy place,” she said.

It’s just one of the many loving things Lawrence has said about the Kardashians through the years, often praising them — and other reality shows like Bravo’s Real Housewives franchise — in interviews.

“You can look at someone else’s life and say, ‘Well, obviously, you shouldn’t marry that guy,’ and it makes you feel like God for 30 minutes,” she told Vogue.

And while it appears she’s yet to meet Kardashian in person, Lawrence did come face-to-face with the head of the KarJenner family, Kris Jenner, at a surprise birthday party for the Hunger Games alum in August 2015.

“My two best friends planned a surprise birthday party with a big surprise within the surprise,” Lawrence told The New York Times about her rollicking 25th birthday bash,

Just as her pals started singing “Happy Birthday” to the actress, “Kris Jenner comes out holding my cake, which is a pile of s—, with a sign that says, ‘Happy Birthday You Pile of S—.’ My knees buckled,” she recalled.

“It was the closest I’ve ever come to losing consciousness,” she said. “I had no idea. I’d never met her before, but we’ve always watched Keeping Up With the Kardashians. And then Kris Jenner and I sang ‘Build Me Up Buttercup’ on karaoke.” 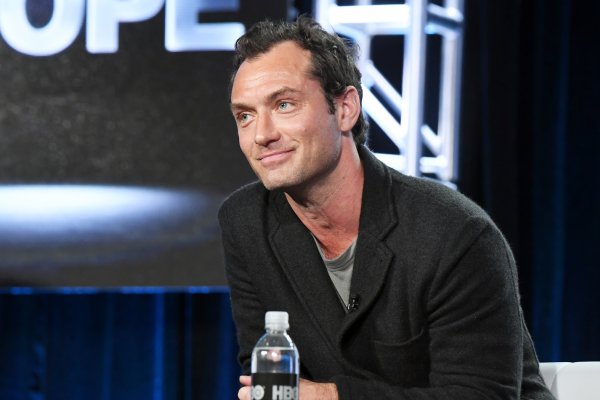 Jude Law Sent the Nicest Email to a Movie Theater Attendant
Next Up: Editor's Pick