Farewell to the Cassini Probe, America's Emissary to Saturn

NASA flight planners have a long history of murdering their favorite space probes. They plan the ships, they build the ships — and at some point they wind up killing the ships.

The Ranger probes — the first NASA spacecraft to touch the moon—were crash-landers. They were designed for one job: to fly straight toward the lunar face, switch on their cameras in the final 14 minutes of their journey, when they were just 1,500 miles from the surface, and then capture as many pictures as they could before vaporizing themselves in a violent, fireless crash on the moon’s airless surface. The Messenger probe, which circled Mercury for four years from 2011 to 2015, met a similarly nasty end, sent to a deliberate crash landing when it was almost out of fuel so it could collect the most close-up data possible before it became a drifting piece of space junk.

On Sept. 15, at 7:55 AM EDT, the Cassini Saturn probe followed its sisters into history, plunging to its end in Saturn’s atmosphere. But in this case, the death of the ship might actually save lives — Saturnian lives.

Long before Cassini left Earth on October 15, 1997, astronomers knew that Saturn’s largest moon, Titan, was probably rich in liquid methane and ethane — hydrocarbons essential for life as we know it. Cassini confirmed that. The spacecraft also discovered that Enceladus, a smaller, ice-covered moon, emits periodic water geysers from its south pole. That almost certainly means a comparatively warm, salty ocean just beneath the moon’s frozen rind. Where there is salty, liquid water, there could be living things.

As an emissary from Earth, however, Cassini could have been carrying trace organisms — or at least organic material. And since the ship, like Messenger, was running out of fuel, there was always a chance it would eventually crash into one of those promising worlds, contaminating an alien ecosystem with residue from the Earthly one. So the ship instead gave itself up to the crushing pressure and annihilating winds of the atmosphere of Saturn, the lifeless mother of those potentially living moons.

MORE: These Stunning Photos of Saturn Are a Beautiful Goodbye From NASA’s Cassini Probe

Cassini’s 20-year career was exceedingly well-spent. In an era of tight NASA budgets, it was one of the space agency’s rare Cadillac probes — a six-ton, 22-ft.-long, $3.25 billion beast of a thing, muscled off the pad by a Titan IV heavy-lift rocket. The ship took seven years to get to Saturn, spiraling outward through the solar and picking up gravitational boosts from planets it passed. In its time in the Saturnian system, it made about 300 orbits of the giant planet, slaloming through its rings and past its 62 known moons — and discovering 12 of those moons.

It ducked through a 1,500-mile-wide gap in the rings, made four harrowing passes between the innermost rings and Saturn itself, and discovered a bizarre hexagonal storm swirling on the planet’s north pole. It came as close as 1,012 miles to Saturn — an eyelash by cosmic standards — and achieved top speeds of 76,806 mph relative to the planet itself.

And now it has died.

At 1:08 a.m. EDT on Sept. 15, the spacecraft passed Enceladus’s orbit for the last time. At 3:14 a.m. it rolled slightly to orient its sensors so it could sample Saturn’s atmosphere during its final plunge. At 6:32 a.m., with its thrusters firing at full capacity, it pierced the Saturnian cloud tops and the violent crosswinds immediately began to rip the ship part.

It was another 83 minutes before Cassini’s incoming radio signal at last went dark on Earth. That’s because, even traveling at the 186,282 miles per second at which light moves, the transmissions took that long to cover the near-billion miles that separate Earth and Saturn. Those last 83 minutes of signals were, in truth, the voice of a dead ship.

Cassini was a machine assembled at the Jet Propulsion Laboratory in Pasadena, Calif., but in its completed form, it spent far more time as a thing of Saturn than a thing of Earth. It’s fitting, then, that the molecules that made up the metal and silicon and wire and plastic that in turn made up spacecraft will never come home. They will, instead, mix and swirl through the atmosphere of Saturn, becoming part of the world they came to help study. 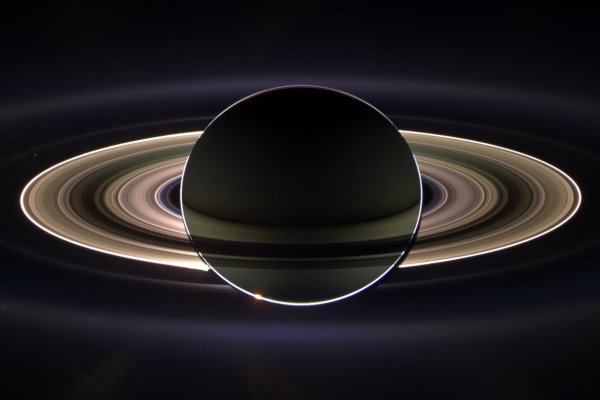 These Stunning Photos of Saturn Are a Beautiful Goodbye From NASA’s Cassini Probe
Next Up: Editor's Pick