Ideas
By Jon Meacham
Meacham is the author of Destiny and Power: The American Odyssey of George Herbert Walker Bush
Jere Meacham on patrol in Vietnam with other members of the U.S. Army’s Fourth Infantry Division. He sent the images to his son in 1999
Courtesy Jon Meacham

Thirty years after everything happened–and 31 years since he had first set foot in Southeast Asia–my father, a soldier of the Fourth Infantry Division, wrote me a letter. It was 1999, and the note came with a set of recently rediscovered photographs he and his friends had taken with an old 35-mm Minolta in the Central Highlands of Vietnam. There were images of impossibly young men, their helmets heavy on their heads, carrying M-16s, smoking cigarettes and trying to look happy–itself a form of bravery. There were pictures of the lush landscape and of villagers going about their business, drawing water and sitting, watching, some blankly, all warily.

My father’s words, though, were the most poignant part of the package. “I thought you might like to have these,” he wrote me. “You are the historian, and I know you will preserve them. I remember the brutal heat, the more brutal humidity, the chop-chop-chop of the helicopter blades and elephant grass that could cut men up like a knife. And I remember many things that I have never told you, or anyone. Those are the demons that I will always bear. South Vietnam, for me, is a place I’ve never really left.”

Neither, truth be told, has America. As I watched Ken Burns and Lynn Novick’s illuminating 10-part documentary The Vietnam War, I thought often of my father and, inescapably, of his “demons.” He hinted from time to time about harrowing firefights with enemy soldiers but offered no details. The numbers tell a grim story: from 1966 to ’70, 2,500 fellow members of what’s known as the “Ivy Division” died; 15,000 were wounded. For my father and so many other veterans, the battles never genuinely ended. Down the decades, casualties of this perpetual war included emotional stability, peace of mind, marriages and, more broadly, America’s sense of virtue and of self-confidence.

The power of Burns and Novick’s documentary lies in its remarkable capacity to tell the story of the struggle in terms both particular and universal. This is part historical narrative, part cultural exploration and part therapy–the last made all the more effective by its subtlety. Burns and Novick take us from the corridors of power in Washington, Hanoi and Saigon (now Ho Chi Minh City) to rice paddies and jungles and POW prisons. Driven by Burns’ characteristic devices–curated music, limited but effective interviews and powerful still and moving imagery–The Vietnam War may well have an even larger cultural impact than his landmark Civil War project of 1990. (Colin Powell, then Chairman of the Joint Chiefs of Staff, gave President George H.W. Bush videotapes of that documentary to watch in the run-up to the Gulf War. In his audiotaped diary, the President recounted how the moving accounts of the travails of ordinary soldiers helped reinforce his determination to avoid a long land war in the Middle East.) I’ve always thought about what it would have been like for veterans of the cataclysm of 1861–65 to experience Burns’ treatment of their war. With the new documentary we don’t have to wonder, for the warriors of the Vietnam era, many now in their 70s, will be able to relive those momentous, disorienting days.

Vietnam and Watergate were decisive events in the erosion of trust in government with which we still live, and both Lyndon Johnson and Richard Nixon admitted in private what they would not say in public. “The great trouble I’m under–a man can fight if he can see daylight down the road somewhere,” Johnson told Senator Richard Russell in a tape-recorded conversation in March 1965, early in the journey. “But there ain’t no daylight in Vietnam.” During the ’68 campaign Nixon was more honest with his aides than with voters–and soldiers: “I’ve come to the conclusion that there’s no way to win the war,” Nixon said. “But we can’t say that, of course. In fact, we have to seem to say the opposite, just to keep some degree of bargaining leverage.” The war would last another seven years.

Hal Kushner, a medic who was held in captivity for five years by the Viet Cong, is among the film’s memorably affecting figures. His voice catching, tears coming, Kushner describes his 1973 release: “There was an Air Force brigadier general in Class A uniform. He looked magnificent. I looked at him, and he had breadth, he had thickness that we didn’t have. He had on a garrison cap and his hair was plump and moist, and our hair was like straw. It was dry, and we were skinny. And I went out and I saluted him, which was a courtesy that had been denied us for so many years. And he saluted me, and I shook hands with him, and he hugged me–he actually hugged me. And he said, ‘Welcome home, Major. We’re glad to see you, Doctor.’ The tears were streaming down his cheeks.”

In the film Kushner tells this story with Ray Charles’ “America the Beautiful” playing softly in the background. To write about it risks making the presentation of Kushner’s release seem hokey, but it is not. Far from it. To me, the Kushner sequence is perhaps the most powerful moment in the entire series, not least because of the newly freed POW’s sense of dimension and size. The magnificence of the officer who greeted him, the “breadth” and “thickness” and the “plump” and “moist” hair: it’s as though the scraggly and sapped Kushner saw the general as the embodiment of the old America, the invincible America, the victorious America–an America that didn’t really exist anymore, or at least not in Southeast Asia.

One cold winter morning after Christmas 1984–I was 15, the same age my son is now–my father and I took a trip to Washington. Like a lot of other veterans, he had been skeptical of the plans for the Vietnam Veterans Memorial, thinking the unusual design in a gently sloping hill in the shadow of the monuments to Lincoln and Washington suggested a lack of respect. Seeing it changed his mind. He said nothing as we walked along the wall of the dead. Coming to the years of his service, he stopped, searching for a familiar name. He found it, and it happened to be within reach. He ran a finger over the letters, turned, stepped back, and we moved on.

In his letter to me with the photographs of Vietnam 15 years later, my father was relatively terse about his thoughts in-country. “I wanted,” he wrote, “to get back to life.” My father is dead now, but for the warriors still among us, Ken Burns has at last charted a path back toward life, and toward home. 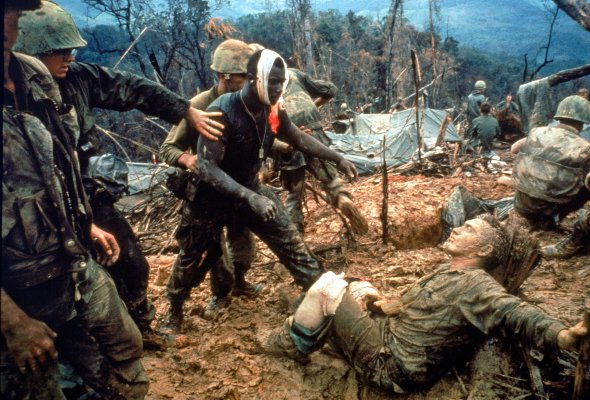 Ken Burns Takes on the Vietnam War
Next Up: Editor's Pick