Isiah Courtney stands in the front yard of his Houston home with his wife, Danielle, son Bryson, daughter Aubree and dog Bruce
Ilana Panich-Linsman for TIME
By Melissa Chan

As Hurricane Harvey’s floodwaters poured into his family’s Houston home on Aug. 28, Isiah Courtney slung sacks of clothing over his shoulder, lifted his 85-lb. pit bull in his arms and led his wife and two young children to safety.

Two days later, the 28-year-old father reversed that trek, returning home for the first time since the storm slammed through Texas, causing an estimated $150 billion in damage and leaving more than 70 people dead. Courtney and his wife found their three-bedroom house in shambles. Their 1-year-old daughter’s crib was soaked, mold covered the cabinets, and nearly every appliance they owned was destroyed.

Courtney, who works as a coordinator at an oil company, had no flood insurance and nowhere near enough savings to pay for repairs. At a moment when all of Houston was hurting, friends and relatives could contribute only so much. So Courtney decided to seek support from strangers.

Isiah and his children Bryson and Aubree inside their home.
Ilana Panich-Linsman for TIME

He started a GoFundMe page asking for $40,000 to repair his home and replace lost appliances and furniture. “Anything will help,” he wrote, below a news photo that showed his family wading through floodwaters. More than 900 people were moved to contribute over $32,000.

“I needed to get the help in order to get everything back to normal,” Courtney told TIME. “The GoFundMe account really helped. I don’t even know how to describe what I would have had to do [without it]. It’s really a blessing.”

Courtney is just one of thousands of Americans who have turned to sites like GoFundMe and YouCaring in recent weeks in the hopes that sharing details of personal plights will stir strangers to help. In the first five days after Hurricane Harvey struck, more than 850 campaigns on GoFundMe brought in more than $4.5 million for causes ranging from diapers for evacuated families to food for rescued pets. A 3-year-old girl who was found clinging to her mother’s lifeless body in Houston’s floods received more than $175,000 for her education, while a Texas family struggling to bury six relatives who drowned in the storm drew over $47,000. YouCaring hosted more than 6,000 campaigns that raised about $44 million, led by NFL player JJ Watt of the Houston Texans, who posted a plea to “come together and collectively help rebuild” after Harvey. Watt raised a record $32 million from more than 200,000 donors.

“It’s the largest crowdfunding campaign of all time,” says YouCaring CEO Dan Saper, who joined the organization in 2014 after leaving the investment industry. “We had never seen such an outpouring of support.”

Crowdfunding–the practice of raising small amounts of money from a large number of donors online–was once the province of startups and political campaigns. But over the past five years, it has ballooned into a multibillion-dollar charity industry, with donations going not to gadgets or causes but to individual people. As Americans watch the devastation of Harvey and Irma unfold in real time, they can now give directly to those who are suffering.

Since GoFundMe launched in 2010, more than 40 million individual donors have raised over $4 billion, with education the fastest-growing request category. YouCaring has raised over $800 million since 2011, largely for medical causes. According to a 2016 Pew Research Center survey, 22% of Americans have donated to such crowdfunding appeals.

This growth is fueled by the generosity of ordinary people joined to the intimate immediacy of social media–but it’s also driven by structural gaps that have left too many Americans one piece of bad luck away from financial hardship. More than 40% of Americans are not prepared to handle a sudden expense of $400 or more, be it replacing a broken car engine, visiting an emergency room without insurance or repairing a flooded home, according to a recent report by the Federal Reserve.

The Courtney family in the backyard of their home.
Ilana Panich-Linsman for TIME

“People need help,” says GoFundMe CEO Rob Solomon, who left his job as a partner in a venture-capital firm to take over the company in 2015. “People want to be empowered to help each other out. There’s a lot of need out there.”

Online crowdfunding began as a way to serve much less personal causes. Indiegogo and Kickstarter, which launched in 2008 and 2009, respectively, allowed entrepreneurs and small businesses to get funding for inventions and projects like the Coolest Cooler–a high-tech drink container with a built-in blender, waterproof Bluetooth speaker and USB charger–and a movie reboot of the beloved Veronica Mars television series.

Sites like GoFundMe and YouCaring saw a chance to tap this impulse and built user-friendly interfaces that seemed more like social networks than traditional charity websites, with trending topics and colorful videos. GoFundMe’s founders, Brad Damphousse and Andrew Ballester, had previously founded Paygr, a site on which neighbors could buy and sell items or services, and their new company extended the support of neighbors to a much broader community. One of GoFundMe’s early successes came after the Boston Marathon bombing in 2013, when more than 34,000 donors raised over $2 million for those who were seriously injured.

GoFundMe’s founders also saw a business opportunity. The site takes 5% of what every campaign raises and also passes along a credit-card processing fee to donors. YouCaring, in contrast, charges only the credit-card fee and is supported by donations. Neither company releases financial information, but the $4.5 million that GoFundMe raised in the first days after Harvey would mean $225,000 in fees for the company.

While no one disputes that this new fundraising model has helped hundreds of thousands of people, it’s not without its challenges. The most successful crowdfunding campaigns convey a dramatic story of heartbreak or hope, complete with photos and personal details. But many people in need don’t have a story that fits neatly into a compelling narrative, or the digital savvy or time to package it that way. And then there’s the randomness of what the Internet elevates and discards. For every case like Courtney’s, which raised tens of thousands of dollars, there are dozens of campaigns that never catch on, leaving people struggling.

Crowdfunding is still dwarfed by traditional charities, which bring in hundreds of billions of dollars each year in the U.S. But mainstays like the American Red Cross and Salvation Army are taking note of the medium’s appeal to a younger generation of donors, especially those who are concerned about the higher overhead costs of established charities. As direct-mail and telethon contributors age, and with some younger donors preferring to give directly to those in need, century-old nonprofits are seeing an opportunity to draw new digital funding streams from crowdfunding sites.

Isiah, 28, finds his wife's sonogram from when she was pregnant with the couple's second child in their back yard after the flood.
Ilana Panich-Linsman for TIME

“We wouldn’t have been here this long if we didn’t continue to adapt and evolve,” says Jennifer Elwood, vice president of consumer marketing and fundraising at the Red Cross, which has worked with CrowdRise, a site acquired by GoFundMe last year. CrowdRise’s supporters are on average 45 to 55 years old, while the donors who respond to the Red Cross’s direct-mail campaigns are 70 to 80 years old. “Part of our DNA is meeting people where they’re at and making sure we’re relevant,” Elwood says.

After Hurricane Harvey, the Red Cross raised more than $211 million, including nearly $6 million through its CrowdRise partnership.

The Salvation Army, which collected at least $20 million for Harvey relief, is also taking a closer look at crowdfunding. When flooding hit Louisiana last summer, damaging thousands of homes and businesses, donors gave $4 million to the Salvation Army’s relief efforts, which the organization said was not enough to meet the needs on the ground. In contrast, GoFundMe users raised over $11 million for more than 6,000 campaigns related to the flood. The disparity was enough to prompt the Salvation Army to consider using crowdfunding campaigns in the future, according to Ron Busroe, the group’s national secretary for community relations and development, but so far the organization has not done so.

Charitable donations in the U.S. have steadily increased since 2010, reaching a record high of $390 billion in 2016, a figure that includes donations given to traditional charities and some crowdfunding campaigns, according to the Giving USA Foundation. That’s a dramatic increase from the roughly $134 billion raised in 1976, a number adjusted for inflation, as well as the $307 billion raised in 2009.

“There is a very significant role that crowdfunding is playing,” says Una Osili, associate dean for research and international programs at the Indiana University Lilly Family School of Philanthropy, which works with Giving USA to track charitable giving. “It’s increasing the overall amount, but it’s also broadening who is participating. It has the potential to draw new donors and make giving more inclusive.”

Still, crowdfunding comes with risks that aren’t present when giving to an established nonprofit. Jeremiah Richard, a 31-year-old Houston father of two, created a GoFundMe page after his family lost everything they owned in Harvey’s floods and had to be airlifted out of their apartment complex–a rescue captured by a local television news station. Speaking to a reporter, Richard counted his blessings in an interview that was widely shared. Soon afterward, he was alarmed to see other pages popping up on the crowdfunding site, created by people he’d never met, purporting to collect money for him.

“It said I was the organizer. They were basically using our situation for their gain,” Richard says. The two accounts he spotted have since been removed from the site. GoFundMe says it verifies the identity of all campaign organizers and employs a team to monitor the platform for fraud. Campaigns involving a misuse of funds make up less than one-tenth of 1% of all funding requests on the site, and when they do happen, the money is returned in full to every donor, the company says.

Aubree, 1, drinks from a bottle of water outside the family's home.
Ilana Panich-Linsman for TIME

For Isiah Courtney, the benefits of crowdfunding far outweighed any potential risks. The $32,000-plus that he has received will go toward repairing his house, including removing ruined Sheetrock and replacing furniture and carpeting. In the difficult days following the storm, he has been heartened by the support he’s received from people he’s never met, many of whom praised him for carrying his family’s pit bull through waist-deep water to dry land.

“You are an Amazing person,” one donor wrote on his page. “Just when my faith in humanity had bottomed out after seeing tons of pets stranded and tied to trees, your picture surfaced this morning and gave me new hope.”

A version of this story first appeared on Time.com on Aug. 25. 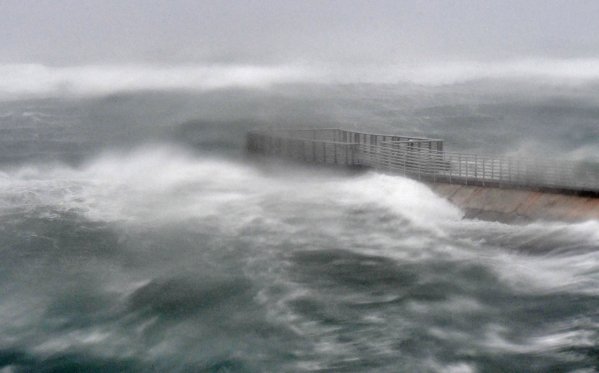 The Angels of Irma
Next Up: Editor's Pick