The U.S. Air Force has deployed an aircraft unit to Texas tackle swarms of mosquitos that have proliferated in coastal regions after Hurricane Harvey caused severe flooding.

According to Reuters, the Air Force program will be extended further across Texas to lower the risk of waterborne diseases such as the West Nile and Zika viruses, which can be transmitted through mosquito bites. C-130s were similarly used to control mosquito populations the wake of hurricanes Katrina, Rita and Gustav.

Although few of the post-flood mosquitos are the disease-carrying variety, swarms of them can still inhibit relief efforts, local health officials say. Residents in affected areas have reportedly been advised to throw away standing water, use repellent, and cover exposed skin.

Read more: What It Was Like to Live Through Hurricane Irma

“For the first time in the nearly 70-year history of the Air Force Reserve, all three special mission units have been called to action simultaneously due to a series of catastrophic events that have affected wide swaths of the U.S.,” Air Force Captain Jeff Kelly said in an press statement.

Hurricane Harvey dumped record breaking amounts on rain on the continental U.S., killed 70 people and caused up to $180 billion worth of damage to over 200,000 homes when it barreled into the Texas coast last month 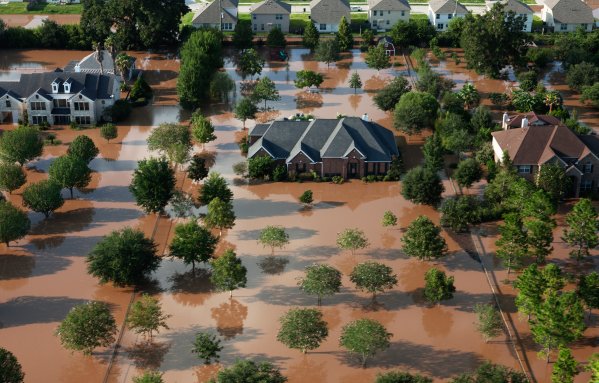 Houston After Harvey
Next Up: Editor's Pick