Inside the White House Hurricane Response

At precisely 12:30 on Sept. 12, more than 60 federal, state and local emergency response officials from around the country convened on a video teleconference to address the catastrophic effects of hurricanes Harvey and Irma. The White House dialed in from a secure, windowless office across from the West Wing, its 24/7 use over the last weeks indicated by the coat rack of suits and the pillow and blanket stacked beside the sofa. The National Weather Service, the Pentagon and U.S. Northern Command linked in via their own video feeds. Front line responders from the Gulf Coast to the mid-Atlantic tuned in to provide updates from the field.

The brisk cadence was well rehearsed. Officials in Florida discussed the ongoing effort to restore power in the wake of Irma’s mass outages, and efforts to prioritize the delivery of food to areas where stores have yet to reopen. They reported the arrival of a Disaster Medical Assistance Team in the hard-hit Florida Keys, and the presence of five urban search and rescue teams on the islands. Homer Bryson, the Director of the Georgia Emergency Management and Homeland Security Agency, warned of fuel issues in the state, especially with evacuated Florida residents looking to return south. “We cannot guarantee that we’ll have fuel to get them through the state at this time,” he said. Alabama’s emergency manager reported declining shelter and hotel populations, as Floridians who evacuated returned home. “These people are getting on the road today,” he said, providing his colleagues in Florida a heads up, adding they’ve seen “steady traffic” on southbound highways.

It was, by mid-September, a familiar scene. For more than 20 days, FEMA has been leading such calls every day—from early in the morning to late at night—to coordinate a whole-of-government response to the storms. Local and state officials discuss their needs with the feds standing ready to meet them. Requests for additional air assets, fuel, and heavy equipment are met with little fanfare and immediate effect. “It’s important to have a rhythm to the day,” says Doug Fears, the Senior Director for Resilience Policy at the National Security Council, whose secure office serves as the White House hub for Hurricane response. The rigidity of the schedule, Fears says, ensures that every player knows their role—and that those who need to make decisions have all the necessary information.

For an administration that has at times struggled with even the most basic challenges, the evident competence of the government response to this month’s massive, back-to-back hurricanes has been an unexpected highlight. Current and former emergency management officials find much to praise in the federal response so far. “They were not waiting for the storms to hit — they could see them coming,” former FEMA Administrator Craig Fugate told TIME. “The first thing they did was put teams in with state emergency operations centers. They also began pre-positioning and moving resources in.” Emergency managers have learned the hard lessons of storms past, says Homeland Security Advisor Tom Bossert, and benefited as officials from President Donald Trump on down stuck to the rehearsed script.

“Their response has been textbook,” says a former Obama administration official involved in emergency response.

In a way, the Trump administration’s performance began last spring. On May 31, a day before the official start to hurricane season, senior White House officials huddled for a refresher course on hurricane response. It built on a similar exercise conducted with their predecessors from the Obama administration. Weeks later, on June 23, they convened “Principals Level Exercise 17-3,” a Cabinet-level major hurricane response and recovery drill. Trump, Vice President Mike Pence, Cabinet officials, governors, and emergency responders all participated in the drill by video conference. Acting Department of Homeland Security Secretary Elaine Duke said the trial response allowed the various players in disaster response to get to know their own roles and each other.

At the White House, Bossert stood up a 24/7-watch office to monitor for disasters—natural and man-made—led by Fears, to serve as the nucleus for the administration’s response efforts. Designed to prevent duplication and distractions for operators on the ground and managers across the government, the resilience and response team serves as the funnel for all White House contact. “It prevents them from double-tapping and triple-tapping operators that are busy,” said an official. Fears and Bossert have been in contact at all hours during the 20-day response to the storms. During a crisis, Bossert has a standing daily briefing with the president and exercises his walk-in authority when needed.

In recent weeks he’s used that access to update Trump on casualty counts or to obtain his sign-offs on disaster declarations. It was the speedy pace of those disaster declarations that officials credit with saving lives. Trump declared a federal disaster in Texas on Aug. 25, even before Harvey hit. “We believe it may have changed peoples’ behavior—that they were less likely to stay knowing that the federal government was already stepping in,” a senior administration official said. “It was absolutely essential,” says DHS’s Duke.

As Irma approached and Florida fuel supplies dropped, officials said Trump intervened to speed up the issuance of a waiver to the Jones Act, the 1920 law that normally prohibits foreign-flagged vessels from transporting goods between U.S. ports. Florida’s fuel supply largely depends not on pipelines, but on tankers and barges and the waiver allowed all available vessels, foreign or domestic flagged, to make the journey. “The most important lesson is time,” Fugate said. “The more you wait for assessments, the more you wait for certainty that something is bad, that’s time you never get back. So you respond against the projected impacts and adjust.”

Days before Irma made landfall in the US Virgin Islands, Trump instructed his team to prepare to bring in the military. “The president’s take was, that’s big, that’s a category 5,” said one official. “There are not enough cops and firemen and emergency managers in the world to take care of what this thing looks like, so his early thinking was, ‘We’ve got to bring out the guys in green.’” That translated into a significant deployment. “For domestic, humanitarian purposes, this was the greatest mobilization of military, marine and naval forces,” Bossert said Sept. 12.

Acting DHS Secretary Duke said planners recognized it was important to deploy the military’s ships off the coast of the Florida Keys and the Virgin Islands because, unlike Harvey, there weren’t going to be areas to land helicopters. “In Florida, for search and rescue, we don’t have a place to really land in the Florida Keys, so we had to pre-position DOD ships so the Coast Guard helicopters had a place to drop off evacuees and refuel,” Duke said.

White House officials also credited the governors of Florida, Texas, U.S. Virgin Island, and Puerto Rico for leading the response on the ground. “They have all demonstrated textbook response mechanisms and leadership decisions,” said Bossert.

Even with two back-to-back hurricanes, FEMA and other responding agencies didn’t exhaust their available supplies. Federal emergency planners have always anticipated the need for responding to two major disasters at once, from terror attacks to earthquakes. In the case of Harvey and Irma, the limiting factor could have been personnel, officials said, but the brief respite between the storms provided search and rescue teams and other first responders time to recover and reequip for the next challenge. “Fortunately we had just enough time in there,” an official said. “If another storm comes it’s going to start wearing them out.”

Ultimately, the greatest source of the administration’s show of competence in the face of the twin storms may have been the storms that came before. Senior administration officials credited the wealth of veteran emergency managers who cut their teeth on 9/11, Katrina, Rita, Sandy and other storms who have moved to positions of authority across the government. FEMA Administrator Brock Long was an official responsible for planning highway counter-flow during disasters Florida and Georgia in the early 2000s. Bossert did a tour at FEMA and was deputy homeland security adviser to President George W. Bush. They, along with many of the leaders at NORTHCOM, the Coast Guard and volunteer organizations like the Red Cross have all worked together closely in response to past storms, in some cases for more than a decade. 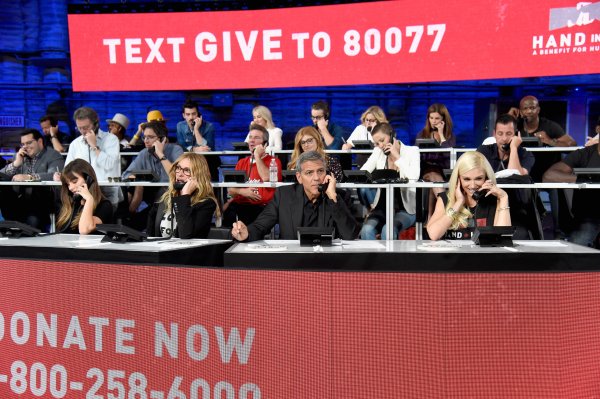 Telethon Raises $44M For Hurricane Relief
Next Up: Editor's Pick