Speaking at the daily press briefing Tuesday, Press Secretary Sarah Huckabee Sanders said Clinton’s book “What Happened” included “false and reckless attacks,” although she did not give further detail.

“I think its sad that after Hillary Clinton ran one of the most negative campaigns in history and lost, and the last chapter of her public life is now going to be defined by propping up book sales with false and reckless attacks,” she said.

Clinton’s memoir was released on Tuesday and is already a bestseller on Amazon. Describing her shocking loss to Donald Trump, the book is filled with several shots at the President and her fear about the country’s future under his direction.

“I had known Donald Trump for years but had never imagined he’d be standing on the steps of the Capitol taking the oath of office as President of the United States,” she writes in the first chapter. “He was a fixture of the New York scene when I was a Senator … only more flamboyant and self promoting.” She also described him as a “creep” who made her skin crawl when they were onstage together during the second debate.

Overall, the word “Trump” is mentioned 536 in the times in the book.

But, despite his prominent placement in the memoir, Sanders says she isn’t sure the President will read it.

“I think he’s pretty well versed on what happened” she said. “And I think it’s pretty clear to all of America.” 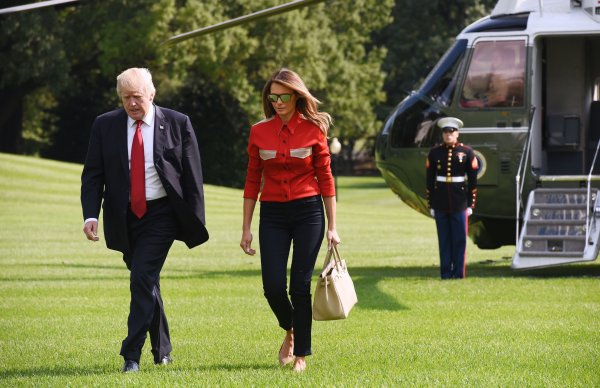