'All We Are Really Living on Is Hope.' Hurricane Irma's Devastation Lingers in the Caribbean

A man walks among the destruction left by Hurricane Irma at the Phillipsburg Town Beach on September 11, 2017 in Philipsburg, St. Maarten.
Jose Jimenez—Getty Images
By Tara John / Antigua

Close to a week after Hurricane Irma tore through the Caribbean, a number of the hardest-hit island-states and territories in the region are dealing with dwindling supplies and a stunning breakdown in law and order.

Residents living on islands of the French-administered St. Martin and the British territory of Anguilla say they feel cut off from the world after flooding and winds destroyed vital telephone infrastructure and electricity, leaving tens of thousands in darkness. “Electricity is down and they are saying it may be down for years,” Anguila resident Imogen Gough, 49, told TIME on Tuesday. She says her neighbor’s roof flew into the front of her home and that she is down to her last liter-in-a-half of water.

There have been reports of mass looting on the island of St. Martin, where more than 90% of the structures have been destroyed. Dutch King Willem-Alexander visited his country’s half of the island on Monday, telling Dutch national network NOS that the destruction was the worst he’d ever seen.

Looting also started soon after Hurricane Irma hit the Caribbean island of Tortola. Andy, 48, who was visiting the largest island of the British Virgin Islands to upgrade a cable, says witnessing it was as terrifying as living through Category 5 hurricane.

“Despite the police being there, the looters were indiscriminately roaming around the hotel with big knives” Andy, who declined to give his surname, said on Sunday after arriving to Antigua. “I was lucky because I had some cell service and my company chartered a plane to get me out, but I think other tourists are probably still stuck there.”

Around 20,000 children have been affected in the hurricane-hit Caribbean countries and more than 130 schools are beyond repair across Anguilla, Antigua and Barbuda, the Virgin Islands and Turks and Caicos according to UNICEF. Joe English, a spokesperson for the organization, witnessed long lines snaking around gas stations in Anguilla as people attempt to get fuel for generators. “The Red Cross, UNICEF and partners are distributing essential supplies including food, safe water and hygiene kits but the needs are immense” he said in an email.

Gough, who is from Canada and has lived in Anguilla for around four years, said the island’s water supply has been cut off since Irma made landfall on Wednesday. Supermarkets are selling bottle water, but there is only one working cash machine on the island. “If you can’t get cash you can’t get water” she said. “From what I have seen as an eyewitness, the U.K. government has been pretty dismal, but thankfully the people here are patient and the community has been helping each other out.”

As reports of desperation mounts, governments of France, Britain and the Netherlands, who administer a number of territories in the region, have had to defend themselves against criticism over their response to the disaster. The Netherlands announced that it was sending extra troops to the Dutch side of St Martin and French President Emmanuel Macron promised to rebuild his country’s overseas territories destroyed by the hurricane. He added that 11 people have died in St. Barts and St. Martin, raising Irma’s overall death toll to at least 38.

British Foreign Minister Boris Johnson defended the country’s response to the “unprecedented catastrophe” on the BBC on Monday. He will be flying into the region and Britain’s Department for International Development says 1,000 military troops have been deployed, providing shelter kits, food and water in Tortola and Anguilla.

For Gough, help couldn’t come sooner. “My neighbors and their four children are drinking water from a contaminated cistern” she said. “All we are really living on is hope.” 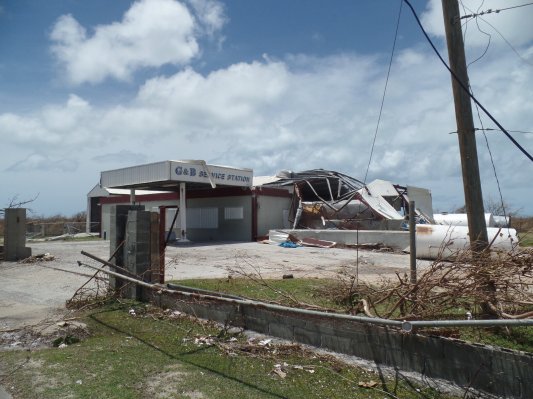 Hurricane Irma's Damage Could Cost Us $300 Million, Antigua and Barbuda PM Says
Next Up: Editor's Pick