Scandal WATCH: 'We Can't Be Together, You Know, Because You Kill My Friends'

Warning: Spoilers ahead because, um, it’s a recap

Throughout tonight’s episode, titled “The Fluffer,” (yes, really) Olivia Pope looked like she could have used a big glass of wine. And maybe an epidural — Kerry Washington is pretty pregnant these days.

After nightmarish interactions with the Grant family last week, Olivia decided to temporarily tap out of Fitz’s campaign meetings. Abby became Olivia’s proxy for the day, and she was wearing the white trench coat to prove it. But fabulous outerwear failed to impress crybaby Fitz who stormed out of his meeting in a “Where’s Liv” fit. “Nice coat,” complimented Cyrus, as the President ran out the door.

Where was Olivia? Also wearing a (significantly bulkier) white coat in a meeting with her father to find out the source of B613’s cash. Because after his tiff with Jake, Papa Pope is now on Olivia’s side, right? Well, Huck certainly isn’t convinced. He thinks that Olivia is being set up as a mark and wants nothing to do with the guy who tortured him and tore his family apart. So sensitive.

Other sensitive topics: the President’s (and future President’s) marriage. Mellie tells Andrew that he shouldn’t be with her anymore, but he won’t hear anything of it. He loves her and thinks she deserves to be loved. At the same time, Democratic candidate Reston is getting press for visiting his wife in jail. (Lest we forget, she turned herself in to save him).

But that’s not it for the sex scandals tonight. The woman who pretended to have an affair with Fitz wrote an intimate tell-all about how “impressive” Fitz is. When asked, Jeanette tells the media that Fitz is “definitely a baguette” rather than a breadstick. Why oh why can’t Olivia be gluten intolerant?

Although Olivia clearly has a weakness for Fitz, she is no longer letting him take full control. When Fitz whines about how Liv swapped in “I don’t care what her name is” earlier (dissing Abby will get you nowhere, Fitz!), she loses it at him. And thus begins her epic speech of the night, condemning him for assuming she is his nanny one second, then his cheerleader, then his drug dealer, based on his erratic mood swings and neediness. “Am I your fluffer today? Is that what I am? What service are you paying me for today?” “I am not the bad guy,” whines Fitz, the very same phrase that chanted by bad guys of yore.

If that interaction isn’t confusing enough, Olivia wakes up that night to Jake drunkenly banging at her door crying about how he misses her, he has nowhere to go, he wanted to be saved and stand in the sun with her and blah blah blah and she said no. Olivia makes the very fair point, “We can’t be together, you know, because you kill my friends.” A very fair point.

Meanwhile Charlie and Quinn are keeping watch over Mama Pope, who is in possession of obscene amounts of cash and is having sex with, presumably, Eastern European terrorists. Harrison meets with a lower-ranking lady terrorist — why is this whole cell comprised of women? — at a bar to ask her to turn on Mama Pope. And the ambitious little terrorist says no, invoking the darkest Lean In reference I’ve ever heard. Mama Pope is a trail blazer and a mentor in an industry where women don’t rise to the top. She would never risk her future. Instead, she’s “leaning in.”

Back to the presidential campaign: people are doing things to piss Olivia off. Cyrus leaked that Sally Langston’s daughter had an abortion (Liv is pissed, it will resonate with the left) and Fitz is trying to get a new VP on board. Olivia is pissed. “You don’t tell me what to do,” Fitz whines, explaining how his new VP choice is a Latina, which will score with new demographics. Yeah, that’s why Olivia suggested going with a woman or minority months ago. Fitz picked a straight white dude from the same state. Deal with your choices, man.

Instead, Fitz is a hypocrite and blames everyone else. He is incredibly cold about Mellie: “I’m almost indifferent to her” because of her “betrayal.” But, as he reaches for his mistress’ hand, he tells Olivia, “I need Andrew to stop screwing my wife.” Then Andrew can stay VP nom. Olivia does his bidding and tells Andrew that he can either “screw Mellie Grant” or be the vice president of the United States. Andrew disappointingly chooses the latter, and breaks it to Mellie later in the episode. The only good that comes from this is that it inspires Mellie to punch Fitz in the face. “You take everything from me,” she screams, in front of a room full of staff members. “I’ll go,” she seethes, “you just keep being president.”

Reston’s wife, on the other hand, isn’t letting her lying, murderous husband get the chance to be president. Thanks to an Abby scheme — with the help of Sally’s right hand man Leo, there has been a momentary Republican truce — the incarcerated wife knows that Reston set her up to go to prison. Reston warns her not to tell anyone or he’ll send her to the “loony bin” until she dies. Luckily Abby set up a video recorder to capture his not so woman-friendly diatribe on camera. The tape leaks and his campaign is essentially over.

But the battle against B613 wages on. Olivia goes to Jake’s house to seduce him and then steal B613 files to shut down the operation. Because Jake, who I know is evil but want to keep rooting for so badly (and do root for whenever he’s shirtless), misses Olivia, he lets his guard down. Olivia gets what she needs, in more ways than one.

Her interpersonal relationships get even more dysfunctional when her mom randomly crashes a dinner she’s having with her dad, nearly causing the two Pope parents to get in a knife fight. Huh? Olivia isn’t handling all this weirdness well and breaks down at the office. Abby is able to pull her out of her funk with a pep talk: “Gladiators don’t run, they fight. They slay dragons, they wipe off the blood, they stitch up the wounds and go on their way.”

Like a true Gladiator, Liv and Huck use Jake’s B613 files to break into the organizations system. Summoning her best Liz Lemon impression, Liv says to “shut it down.” Unfortunately victory is short-lived. It turns out that Mama Pope has a bomb that’s the “Mona Lisa of boom,” and B613 was going to stop her from detonating it.

“Let me break it down for you,” Jake says, storming into Olivia’s office and pushing her against the wall. “You just killed the president.”

I doubt it, but we can only hope. 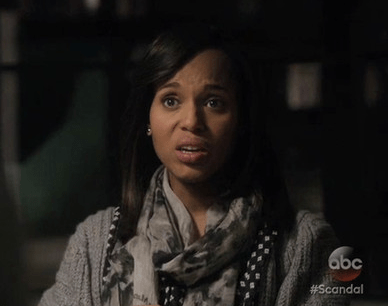 Sorry, Sheryl Sandberg: Scandal Just Made an Evil Lean In Reference
Next Up: Editor's Pick