Apple’s New iPhones Are Designed for Augmented Reality. What Is That?

The iPhone 8, iPhone 8 Plus and 10th anniversary iPhone X smartphones will all support apps built on Apple’s new augmented reality platform. Augmented reality, or AR, allows digital concepts to interact with a person’s real-world environment, giving the impression that the digital world and real-world surroundings have combined. It’s distinct from virtual reality, or VR, which involves wraparound headsets and full immersion in alternate worlds.

It’s also distinct from mixed reality, or MR, which involves the introduction of specific objects to real world surroundings. MR is in essence an object-specific subset of AR—if AR is an application like a GPS mapping program, MR would be the visible virtual objects, like signposts or arrows, overlaid on top of the real world within that app.

With AR, users of Apple’s new iPhones will in theory be able to use apps that make real world tasks such as taking measurements easier and more precise. People can also use AR to play games that evolve dynamically based on real world elements captured from a person’s immediate surroundings.

During the presentation, Apple SVP Phil Schiller showed how apps can make use of augmented reality technology, from a baseball app that helps users learn statistics to a stargazing app that displays the locations of stars and constellations. 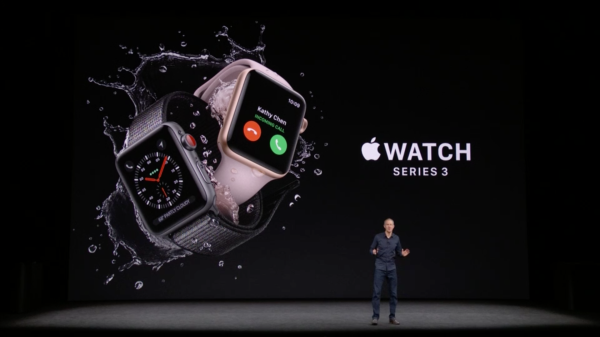 The New Apple Watch Doesn't Need Your iPhone Nearby
Next Up: Editor's Pick