Hillary Clinton doesn’t just want you to read her campaign memoir. It turns out she thinks you should read a few more books.

In “What Happened,” the former Secretary of State reflects on her failed presidential campaign, reflecting on her concerns about the direction President Trump is taking the country and how she handled her loss.

Clinton peppers the book with references to books that she thinks help explain Trump’s rise and how America should respond to it as well as poems, novels and essays that inspired her and helped her cope with her loss.

Here’s a look at the books she namechecks:

Clinton quotes a line about anti-democratic leaders who sow distrust of facts from Yale history professor Timothy Snyder’s 2017 bestseller about lessons that can be learned from past totalitarian regimes.

“The Assault on Reason”

“The Power of the Powerless”

Clinton says that after the election she reread former Czech Republic president Václav Havel’s essay about how individuals can fight back against authoritarian regimes.

“Return of the Prodigal Son”

Clinton says after the election she re-read a book by Dutch priest Henri Nouwen, which she says she’s turned to during past difficult times.

Clinton cites a viral letter from an anonymous woman who was sexually assaulted by a Stanford student that was read aloud in court.

Clinton references the book about women in the workplace written by her friend, Facebook chief operating officer Sheryl Sandberg, noting a section on how professionally successful women are often disliked.

Clinton references her previous autobiography, “Hard Choices,” noting that it “was long—more than six hundred pages about foreign policy!” but that she had “a lot more things I wanted to say.” She also references “It Takes a Village” and Chelsea Clinton’s children’s book “She Persisted.”

“The Boys on the Bus”

Clinton namechecks Timothy Crouse’s nonfiction book about the 1972 election: “During the 1972 presidential campaign, the reporters who traveled with the candidates were called the boys on the bus. By 2016, it was the girls on the plane.”

Clinton notes that her daughter Chelsea loved the science fiction classic “A Wrinkle in Time” and Gabriel García Márquez’s “One Hundred Years of Solitude.” She quotes Kahlil Gibran’s beloved book of poetry “The Prophet” on having children.

Clinton says that crowd at Trump rallies chanted “Guilty! Guilty!” about her “like the religious zealots in Game of Thrones chanting ‘Shame! Shame!’ while Cersei Lannister walks back to the Red Keep.”

“The Clue of the Tapping Heels”

Clinton notes that Nancy Drew would “often do her detective work in sensible trousers,” quoting a line from the 1939 mystery book where she says, “I’m glad I wore pants.”

Clinton says her bookshelves are stuffed with U.S. history and biographies of presidents, but says she couldn’t read them after the election. She recounts reading Alexis de Tocqueville’s “Democracy in America” in college, calls Alexander Hamilton’s defense of the Electoral College as a bulwark against foreign influence in Federalist Paper No. 68 ironic and quotes Lin-Manuel Miranda’s “Hamilton.”

“The Destruction of Hillary Clinton”

Clinton cites the gender studies professor Susan Bordo’s book to say that the anger about her at Trump rallies “was almost medieval.”

“With Liberty and Dividends for All”

Clinton says that before running for president she read Peter Barnes’ book about creating a universal basic income program to pay dividends to every American similar to Alaska’s Permanent Fund, but said her team couldn’t make the numbers work.

“A Black Man in the White House” 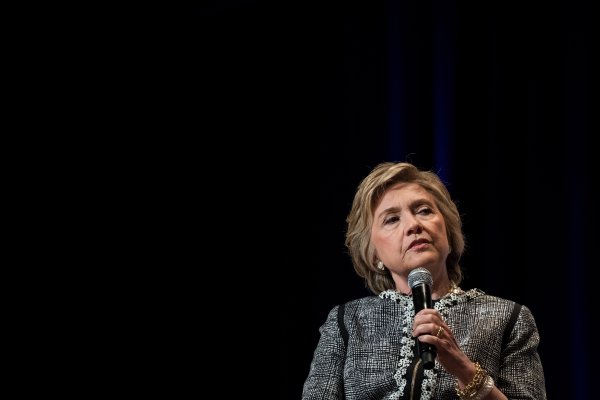 The 4 New Hillary Clinton Quotes You Need to Read Today
Next Up: Editor's Pick