Health officials across the country are investigating a multi-state outbreak of human bacterial infections linked to puppies sold through Petland, an Ohio-based chain that operates stores in the U.S. and abroad, including in Japan, South Africa, Mexico and Canada.

As of Sept. 11 this year, 39 cases of human Campylobacter infections — which can spread through contact with dog feces and usually does not spread from one person to another — have been reported in seven states: Florida, Kansas, Missouri, Ohio, Pennsylvania, Tennessee and Wisconsin.

The outbreak has been linked to contact with puppies bought from Petland stores. Of the 39 cases of human Campylobacter infections that have been reported, 12 people were Petland employees and 27 had either recently purchased a Petland puppy, visited a Petland, or visited or lived in a home with a Petland puppy before they became ill.

A person infected with Campylobacter may experience symptoms including diarrhea, fever, nausea and stomach cramps between two to five days after they are exposed to it. To prevent further infections, the CDC recommends that adults wash their hands thoroughly with soap for at least 20 seconds after touching their pet or their food, pick up and dispose of dog feces, clean up any dog urine, feces or vomit in the house immediately and prevent pets from licking them around their mouth, face or in an open wound.

A Petland statement released to CBS News said the company “reinforces proper hand sanitization before and after playing with any of our puppies with the many sanitation stations in each store and has strict kennel sanitation procedures and protocols put in place by consulting veterinarians.”

The statement added that Petland was “proud of [its] commitment to quality controls and record keeping.”

The CDC is continuing to investigate the outbreak. 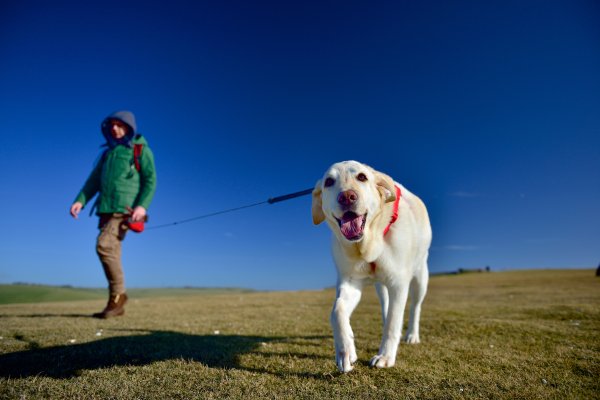 The Real Reason Why You Love Walking Your Dog
Next Up: Editor's Pick