The cost of rebuilding the Caribbean island of Barbuda left in ruins by Hurricane Irma could be as much as $300 million, the Prime Minister of Antigua and Barbuda has warned. He urged the international community to come to the aid of islands severely hit by the Category 5 storm.

“We require probably about $250-300 million,” Prime Minister Gaston Browne told TIME in an interview in Antigua on Tuesday. “The extent of the damage is beyond the means of these islands … Global human cooperation is an absolute necessity.”

The dual-island state of Antigua and Barbuda was one of the first places where Hurricane Irma made landfall, with winds of up to 185 mph. As a coral island just a few feet above sea level, Barbuda had few natural barriers to break the impact of the winds. As a result, some 95% of the structures on the island about the size of Nantucket were either damaged or destroyed. Its infrastructure is in pieces and its population of 1,800 are now homeless and scattered around a number of shelters across Antigua, which escaped the worst of the storm’s impact. Rebuilding homes and infrastructure could take at least six months, officials said.

Antigua and Barbuda is just one of the island nations and territories ravaged by Irma. The British Virgin Islands and St Martin, the island shared by the Dutch and the French, also saw catastrophic damage. Browne said the costs to repair St Martin could top $1 billion. “I don’t think there is any time in living history where one would have seen a Category 5 (Hurricane Irma) and a Category 4 (Hurricane Jose) in such close succession,” he said. “We have no doubt this is a result of global warming, sea level rise and climate change.”

Browne backed the call by British billionaire Richard Branson — whose Necker Island resort was also ruined by the storm — for a Marshall Plan to help revitalize and rebuild the areas stricken by Hurricane Irma in the Caribbean. “This is not a situation in which Caribbean islands are going cap in hand or with a begging bowl to wealthy countries. They have an obligation to assist [small developing islands] especially as heavy polluters. They have to help us because they are contributing to the issue as heavy polluters.”

Prime Minister of Antigua and Barbuda Gaston Browne alongside Prince Harry during the British royal's official visit to Antigua on Nov. 21, 2016
Pool/Samir Hussein—WireImage

The Prime Minister, who has been vocal about the risks small island developing states (SIDS) face since being elected in 2014, urged U.S. President Donald Trump to remember the Caribbean as he asks Congress for funds for hurricane recovery. “My message is: just as Trump is helping other U.S. states, like Florida and Texas, just remember that there are some countries in the Caribbean that got damaged and the U.S. can do more,” he says. “They ought to do more. You cannot be the biggest and most powerful country in the world and have small islands right on your doorstep on the so-called third border.”

Antigua and Barbuda has largely avoided the food shortages and looting that has occurred in other Caribbean islands, like St Martin, in the aftermath of Hurricane Irma. Antigua and Barbuda’s Minister of Foreign Affairs and International Trade Charles Fernandez attributes it to two things: the island lacks “the large disparity of income, which is what you see in other islands” he told TIME, and it was fully evacuated in the wake of the storm.

But the government must now appease homeless Barbudans while trying to tackle what is one of his country’s biggest issues in a sustainable manner. At a public consultation on Monday evening, numerous Barbudans bristled at the notion that they won’t be able to immediately move back to the island, despite officials insisting that they are attempting to prevent an outbreak of a mosquito-borne disease like Zika.

Browne now hopes that with the help of international donors he will be able to rebuild an island that will withstand the storms of the the future. His government has worked towards upgrading the island’s building codes, by creating concrete homes, with concrete roofs that have deep foundations, which go up to 40-feet into the bedrock.

“What my government doesn’t want is for any donor in the public or private institution accuse us for not being getting value in money,” he says. “So if we have a similar storm in two or seven years from now, we can say: “hey now look we have a more resilient country that can stand up to the effects of climate change.” 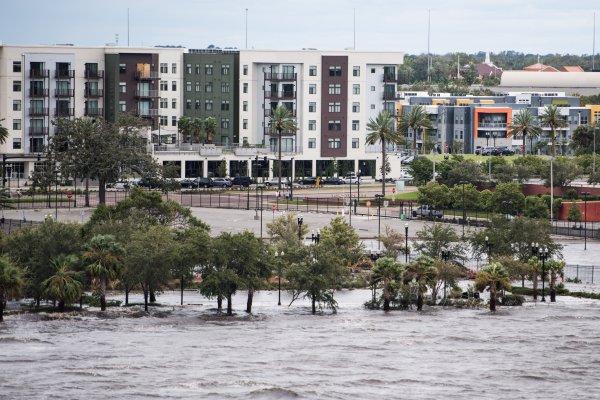 Millions in Florida Still Without Power After Irma
Next Up: Editor's Pick