The U.N. High Commissioner for Human Rights, Zeid Ra’ad Al Hussein, said Monday that recent violence committed by the state against Myanmar’s Rohingya minority appears to be a “textbook example of ethnic cleansing.” The Rohingya, a stateless Muslim group in a predominantly Buddhist country, have been subjected to decades of persecution. The emergence last year of an insurgent Rohingya army has further deepened their misery; two separate and fatal attacks on state security forces — on Oct. 9, 2016 and Aug. 25, 2017 — each triggered devastating military reprisals characterized by extrajudicial killing, torture and mass displacement of innocent civilians.

Since the Aug. 25 attacks, more than 370,000 Rohingya and other villagers have fled across Myanmar’s western border by land and water seeking sanctuary in Bangladesh. Arrivals say the military, and some armed civilians empowered by security forces, continue to burn down Rohingya villages and kill indiscriminately. Thousands more Rohingya are arriving each day at overcrowded refugee camps and new, informal settlements near Cox’s Bazaar, where they scramble for meager food rations and a place to sleep. They are exhausted after days of walking barefoot over mountains and across rivers; many have bullet wounds and injuries from arson attacks. New reports claim the Myanmar military has begun laying landmines along the border, and that soldiers have been shooting unarmed civilians even as they try to flee.

The recent exodus is just the latest in several waves of mass migration over the past four decades, and by most measures it is the worst. The Myanmar government has said about 400 people died during the renewed conflict; Bangladeshi officials claim the number of dead has exceeded 3,000. Countless others are now at risk of preventable deaths in refugee settlements and remote areas unreachable by humanitarian aid workers. The total number of Rohingya now sheltering in camps in Bangladesh has reached about 700,000, with new arrivals joining the hundreds of thousands who fled violence in previous years. The exact Rohingya population is unknown (the group was excluded from Myanmar’s 2014 census, the country’s first count in more than three decades), but the number of people displaced over the past three weeks alone could represent more than a third of the estimated 1.1 million believed to reside in Myanmar.

Who Are the Rohingya?

The Rohingya are a Muslim minority that mostly resides in Rakhine, an impoverished state on Myanmar’s western coast. The majority of people in Rakhine are ethnic Arakanese Buddhists, while Rohingya are the majority in the state’s northern townships of Maungdaw, Rathedaung and Buthidaung. These Muslims have resided in Myanmar for centuries, though their provenance and right to reside there is deeply disputed by the country’s Buddhist majority. To Buddhists, the Rohingya are illegal immigrants from neighboring Bangladesh. The group’s social and political rights have steadily eroded since the mid-1900s amid the rise of Buddhist nationalism, and a 1982 citizenship law passed by the then-ruling military junta made most of them stateless. With an approximate population of more than a million, they are the world’s largest group of stateless people — unwelcome not only in Myanmar but also in Bangladesh and India.

Muslims in the state’s north once lived peacefully with their Buddhist, Hindu and other neighbors. Over the past half a century, however, the group has often become the target of nationalist propaganda campaigns claiming they are dangerous interlopers. Several waves of violent displacement sent many Muslims fleeing, while government housing projects relocated large groups of Buddhists into what were previously Muslim townships. The Rohingya saw their lives slowly transformed as schools, businesses and health facilities became more segregated. The United Nations, Amnesty International, Human Rights Watch and other independent groups have documented decades of abuse and discriminatory public policy against the group amounting to persecution.

In 2012, deadly riots in the state capital Sittwe left hundreds dead, displaced more than 100,000 and left the state deeply divided. Perhaps most devastatingly, regional authorities have used security as a pretext to restrict their freedom of movement; Rohingya are not allowed to travel without permission, often preventing them from accessing critical health services, basic commodities and education. Their desperate circumstances have caused many to flee the country by boat, aided by human traffickers, leading to a regional migration crisis in 2014 that left thousands dead and countless others at the mercy of traffickers as undocumented migrants.

What Caused the Current Exodus?

The Arakan Rohingya Salvation Army (ARSA), the Rohingya insurgent group that surfaced in late 2016, attacked about 30 state security outposts on Aug. 25, killing a dozen officers. The ambush followed reports in recent weeks that the military had been deploying an alarming number of troops to the northern part of the state, causing concern among local populations and independent observers — including the U.N. rights rapporteur to Myanmar, Yanghee Lee — that the heightened security measures could further inflame tensions. Already poised to retaliate, Myanmar military troops, police and other security forces responded to the attacks with savagery; within days, thousands of Rohingya and other civilians began pouring over the border into Bangladesh claiming their villages had been razed and that Myanmar troops were indiscriminately killing people. Many reportedly arrived with serious injuries. Children as young as seven have been treated at clinics for gunshot wounds.

The crisis closely resembles last year’s exodus, when an estimated 74,000 Rohingya fled similar “clearance operations” launched by the military in response to the Oct. 9 attack by ARSA militants. A U.N. flash report published in February, based on interviews with more than 220 refugees in camps along the Bangladeshi border, concluded the likely commission of crimes against humanity by the Myanmar army and other auxiliary forces. According to the report, more than half of the women interviewed said they had been raped or otherwise sexually assaulted. Sixty-five percent claimed they had witnessed a killing. Similar accounts are already being reported by newly arrived refugees, but, as happened last year, restricted access to the affected area has made the claims impossible to verify.

What Is Being Done About the Crisis?

The Myanmar government has consistently denied abuse and has cut off most humanitarian access. The government of Aung San Suu Kyi, the Nobel peace prize laureate and former dissident who last year became the country’s de facto democratic leader, has come under harsh criticism for failing to stop or even speak out against the violence. Officials claim Rohingya militants are responsible for killing civilians, and that Rohingya have been setting their own houses on fire. Local reports suggest that militants have caused some of the deaths and destruction, but testimony indicates that the Myanmar military is the primary culprit. “The Myanmar Government should stop claiming that the Rohingyas are setting fire to their own homes and laying waste to their own villages,” U.N. rights chief Zeid said Monday. “This complete denial of reality is doing great damage to the international standing of a Government which, until recently, benefited from immense good will.”

Bangladeshi Foreign Minister Abul Hassan Mahmood Ali briefed diplomats on the situation Monday, blaming the government of Myanmar for a “policy of wiping them out of their land through [a] gradual and excruciating process.” The country, which has not acceded to the U.N. refugee convention and does not provide legal status to these asylum seekers, has in the wake of the crisis suspended its prior policy of turning back refugees, letting most proceed across the border to safety while a smaller number remain in limbo at the border. The minister also called on the international community to support a controversial plan to temporarily resettle Rohingya refugees on Bhashan Char, a remote island prone to cyclones and flooding. The U.S. and the U.N. have both commended the Bangladeshi government’s initial response to the crisis, urging the country to keep its borders open and calling on the international community to provide assistance for the refugees.

The Bangladeshi Foreign Ministry has further urged Myanmar to immediately implement the recommendations of the Rakhine Commission, an independent advisory board chaired by former U.N. chief Kofi Annan and established at the behest of Suu Kyi. The commission’s recommendations, which were made public only hours before the attacks that triggered the latest episode of violence, include creating a path to citizenship for the Rohingya, granting them freedom of movement, calibrating security responses with political intervention, and pursuing equitable socio-economic development throughout the state. “The root of the Rohingya crisis lies in Myanmar,” the Bangladesh Foreign Ministry said in a statement to diplomats. “Therefore the ultimate solution has to be found in Myanmar only.” 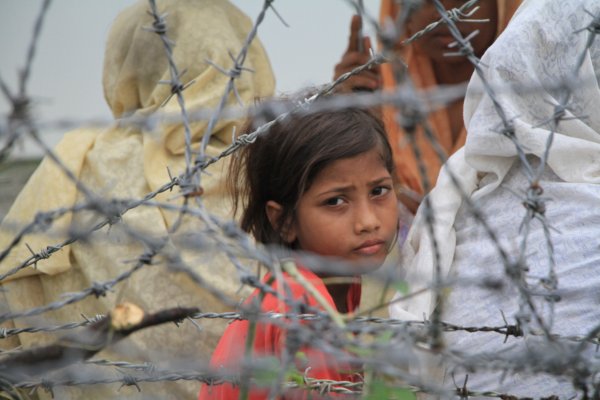 Bangladesh Protests Landmines on Myanmar Border
Next Up: Editor's Pick