As Hurricane Irma Lashes Florida, an Expert Explains How Cities Can Boost Their Flood Defenses

After it had raged through the Caribbean, sucked the sea back from the Bahamas coast and devastated the tiny island of Barbuda, Hurricane Irma tore up the Florida panhandle Sunday night cutting power for four million people en route to Tampa. A map produced by the U.S. National Hurricane Center showed that along parts of the State’s southwestern coast storm surge flooding could surpass nine feet; already, parts of downtown Miami were a couple of feet underwater. “Pray for us,” Florida governor Rick Scott said in an interview as the hurricane began its assault on his state.

Meanwhile, a thousand miles west, Houston was coming to terms with the devastation wrought by Hurricane Harvey, the third “one-in-500-year” storm to hit the city since 1979. Harvey dumped record rain levels on the continental United States and caused up to $180 billion worth of damage to over 200,000 homes. On the other side of the world floods killed more than 1,200 people and affected an estimated 40 million in Bangladesh, India, and Nepal; and in the casino capital of Macau — one of the world’s richest cities per-capita — Typhoon Hato caused an unprecedented 11 deaths in August.

“Severe incidents of flooding are increasing worldwide, “says Piet Dircke, global program director for water management at consultancy firm Arcadis. “That is due to a combination of climate change, land subsidence, sea-level rise, and urbanization.”

A former professor of urban water management at the Rotterdam University of Applied Sciences, Dircke has reviewed the flood safety master plans in the Netherlands and Jakarta, and prepared coastal resilience and water resource plans for Bangkok, the Indonesian city of Semarang and Myanmar. He has worked on flood remediation projects in New Orleans in the wake of Hurricane Katrina and New York City after Hurricane Sandy, among others.

TIME caught up with Dircke in Hong Kong Thursday to learn about what cities around the world can do to better brace against storms hitting with increasing frequency and intensity.

TIME: Despite better early warning systems flood losses are predicted to increase five-fold by 2050 in Europe alone. Why are floods getting more costly?

Dircke: Severe incidents of flooding are increasing worldwide, that is due to a combination of climate change, land subsidence, sea-level rise, and urbanization. Often urbanization comes with bad spatial planning: the density of cities is increasing enormously and they are overwhelmed by growth. What you see now is that every new flood creates more damage than the last, even in areas where flooding has always been common. For example, Thailand’s Chao Phaya River delta has always flooded in the monsoon season but the flood areas are no longer rice fields or small villages. Now they are home to big industries. So the recent flooding in Bangkok did not only have an impact on the local economy but also on the Japanese economy because there are Japanese car factories there and even on the world economy because there were certain crucial parts for computers made in Bangkok that were out of the market for a while.

Which cities do you consider most vulnerable to flooding?

Historically people settled low-lying coastal plains and river deltas. These were the places best connected to trade networks and fertile basins where food could be grown. But we have built too much without enough understanding their vulnerabilities. Deltas are made up of very soft sediments, which means when you start living there building on them, draining the soil, and extracting the ground water you get subsidence. The threat of subsidence in many places by far exceeds the threat of sea level rise.

In Jakarta for example, which has 13 rivers flowing through it, the sea level is rising three millimeters a year but the more urgent problem is the subsidence rate of up to 25-centimeters per year. In 40 years, Jakarta will be a whole 10 meters lower than it is now. If Indonesia doesn’t act very rapidly, North Jakarta will soon become unlivable for much of its population.

The next most vulnerable city is Miami. Miami is built on limestone and coral reefs, these are solid so there’s no subsidence but they are also extremely porous. The city’s fresh water supply is running out and the whole ecosystem is under saltwater pressure from the rising seas. In addition, there is almost no flood protection and you have this risk every summer season of being hit by a hurricane. These risks are already starting to play out right now as we speak.

The low-lying Netherlands has been fighting floods for more than 1000 years. How does the U.S. approach to flood mitigation differ?

In the U.S. only a limited portion of the population is exposed to flood risk. Why would somebody from the desert pay for flood protection in New Orleans? Raising taxes is difficult and the structure of society is more individualistic. The U.S. also needs to invest in maintenance and renovation because infrastructure ages. A lot of Europe’s infrastructure was built after WWII but the U.S. started to develop its modern economy 25 to 50 years earlier. A lot of the bridges, pumps, canals, and dams are at the end of their life cycles. Houston has decent flood protection and a drainage system but it’s a little aged and because of rapid urbanization, and the U.S. tendency to pave everything, the infiltration rate [the speed at which water enters the ground] has gone down rapidly.

Americans have shown that they are capable of lowering the risk of loss of life and responding to a crisis. But they focus less at prevention because they consider the country too big, it’s too expensive, and there are many different types of risk including earthquakes, fires and tornadoes. But economics are changing this way of thinking. New York suffered more than $100 billion dollars in damages and Houston is going even higher than that.

How have U.S. responses to flooding changed from New Orleans in 2005 to New York in 2012, to Houston and Florida today?

In New Orleans, we had one client, the Army Corps of Engineers (USACE), and they spent $15 billion building the Hurricane Risk Reduction System. In New York with Sandy the situation was completely different. The first-responders were private firms that were underwater. The first to call me was from Verizon. The next were from water treatment plants, then hospitals, then banks. In New York, for the first time private parties started to say “We’re not going to wait until there is an integrated regional plan 25 years from now. We need to safeguard our business continuity before the next hurricane season.” Period. We still have to find out how well that works, because when private firms just build perimeter protection around their premises its not ideal. But at least it helps protect critical infrastructure and to make a city more resilient.

Private capital securing valuable parts of a city while other communities are exposed to risk — does that sound like much of a roadmap for the future?

I like the idea that some private firms protect their functionality. In the case of telecommunications firms, for example, that means that people in a flood situation can check that their family members are okay. That’s a good thing. But when it starts become a case of protection of property and persons then you cross a line somewhere. When some groups of people are safer than others a lot of complicated issues arise. My vision is that we should go for integrated, joined solutions that benefit everybody — for a start that’s far cheaper than everybody singularly building their own little castles.

We’ve discussed cities in different stages of development and with different water challenges, but what things can they all do to be more resilient?

First of all, invest in flood protection because it pays off. It not only helps to prevent future damage, it also helps to brand your city by making it a good place for businesses to build their headquarters, for instance. Beyond investment, the basic thinking has to change. We cannot continue to say, “Here’s another one-in-five-hundred-years event.” We have to think worst-case scenarios. If the unthinkable happened what would I do? Where would I go? Would there be places in my city that would still be safe?

The second thing is we’ll have to think about giving more space to water. You can build dykes or floodwalls or dunes, but river water and rainfall events still happen and in the end you will have to give more space to water. In Holland with its temperate climate we are used to thinking of flooding from the sea as a deadly risk and everything related to rain as simply a nuisance. But Houston shows that rainfall alone can be enough to create a disaster; I think this will bring about the next step in resiliency thinking.

Last but not least: avoid living in places that are too dangerous. This is extremely difficult because often it’s the poorest and most vulnerable who are most at risk: the poorer you are the lower you live. When I say give room to the river, for example, it could mean displacing thousands of people — so how are you going to deal with that? Do you have a fair offer for these people? Do you offer them a living, a job, new schools, new housing?

Given that you cannot stop all the flooding at least make sure that your most critical primary infrastructure is safe: telecommunications, water supply and treatment, public transport, and then things like hospitals and prisons. If you can’t make your critical infrastructure more resilient, build it somewhere else. 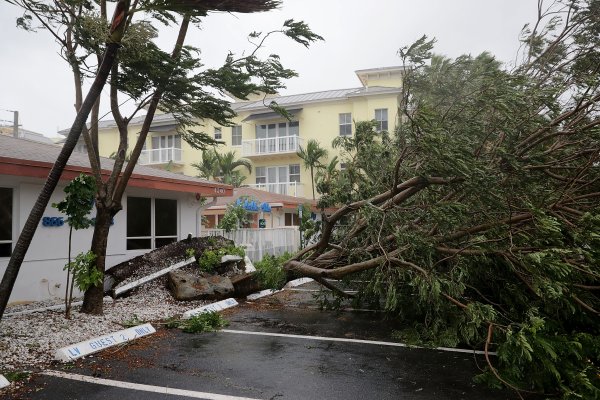 How Hurricane Irma Can Cause Tornadoes
Next Up: Editor's Pick