Rafael Nadal of Spain poses with the U.S. Open championship trophy after he defeated Kevin Anderson of South Africa in the Men's Singles Finals match on on September 10, 2017 in New York City.
Abbie Parr—Getty Images
By Sean Gregory

Who called this one? Exactly no one, that’s who.

Coming into this year’s tennis season, sports writers and commentators were contemplating career obituaries for Rafael Nadal and Roger Federer, rather than predicting that they would sweep the season’s Grand Slams. Who could blame them for preparing for the end of Roger and Rafa, whose stocks were slipping?

Nadal’s 2016 results were a dour read: loses the first round at the Australian Open; withdraws from the French Open — where he had won nine titles — with a wrist injury before the third round; misses Wimbledon due to a bum wrist; fails to win a medal at the Rio Olympics; fourth round loss at the U.S. Open; ends the season in October (wrist again). He was 30, a pro for over half his life, with a dossier of injuries to show for it.

Nadal and Federer won every Grand Slam tournament in 2006, 2007, and 2010. Now, improbable as it is to believe, you can add 2017 to that ledger. Nadal beat South Africa’s Kevin Anderson in straight sets at the U.S. Open final Sunday evening, 6-3, 6-3, 6-4, to cap off his remarkable Grand Slam campaign. Having won his 10th French Open in May, Nadal now owns 16 Grand Slam singles titles, two more than Pete Sampras’ 14, and three behind Federer’s record of 19.

Sure, Nadal’s still chasing Federer in the title count. And Federer’s own 2017 revival — he defeated Nadal in five sets in the Australian Open final, and won a eighth Wimbledon — won’t make Nadal’s quest to catch him any easier. Why shouldn’t these guys keep on winning? This year has shown that until otherwise, they’re still royalty. But Nadal is still five years younger than his rival and his deficit can be closed.

Nadal and Federer were on a collision course to meet at this year’s U.S. Open, which would have been for the first time at this tournament. But Juan Martín Del Potro crushed those dreams, by knocking off Federer in a tense quarterfinal. After Federer fell, Nadal’s title felt like a fait accompli. The semis were anti-climatic, and Anderson, the 28th seed, offered little resistance in the final. Anderson needed two lengthy games early in the first set to hold serve: Nadal finally broke him to go up 4-3, then cruised from there to close out the opening set. Anderson didn’t have a break point opportunity the entire match.

“He never goes away,” says Anderson. “I’ve seen so many times where, he’s maybe down a break, and he’s able to play every single point at such a high intensity. A lot of guys, sometimes, you might see them get angry at a line call and suddenly they start playing better tennis. I have never seen him [where it’s] some external factor and suddenly he’s bringing better tennis. He brings that high energy every single point.”

While serving out the match at 5-4 in the third, a couple of knucklehead fans screamed Nadal’s name before his first two serves of the game and Nadal seemed a tad distracted before the crowd of 25,755 finally complied with the umpire’s request to be quiet.

At 15-15, Anderson had an easy opportunity to crawl closer to his first break point. Nadal sailed a lob to him, begging to be put away. Instead, Anderson smashed it long, as if he were taking a beginner’s lesson. At match point, Nadal served-and-volleyed for the championship; he arched his back, raised his arms, and during the trophy ceremony, thanked the New York crowd that had just annoyed him. Nadal knows the deal with the boisterous New Yorkers. Three U.S. Open titles buys you such expertise.

On the Arthur Ashe Stadium Jumbotron, Nadal watched a video montage celebrating each of his Slam 16 titles. Not too long ago, many fans doubted we would witness Nadal, and his nemesis Federer, soaking in such celebrations after winning major championships. The film took quite a while to get through. To the great benefit of tennis, it might just keep getting longer. 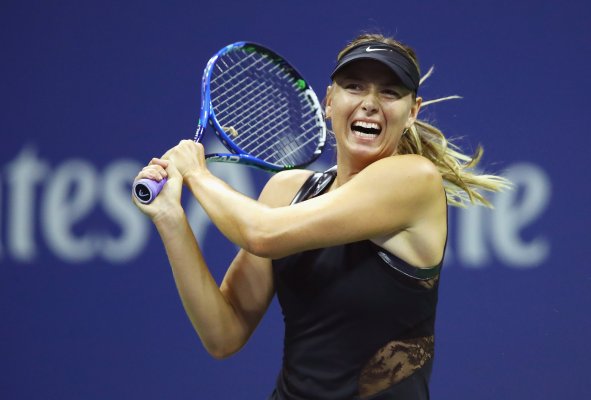