This Is Where Hurricane Irma Is Right Now

Hurricane Irma made its second landfall in Florida on Sunday afternoon, hitting Marco Island as a Category 3 storm at 3:35 p.m. ET.

Despite being downgraded from a Category 4 hurricane, Irma is still expected to bring life threatening conditions, including fierce winds, heavy flooding and storm surge. The Marco Island Police Department reported wind gusts of up to 130 miles per hour, according to the National Hurricane Center, or NHC.

Irma made its first U.S. landfall in the Florida Keys Sunday morning just after 9 a.m. ET at Cudjoe Key.

A photo shared by the Marco Island police showed the area inundated with water. The island’s Emergency Operations Center said it had experienced a “system wide water pressure loss” because of the storm. The center warned residents to stay inside, keep away from windows, and evacuate to a second story floor if possible.

Floridians should expected Hurricane Irma to be an “extremely dangerous major hurricane” with “life-threatening wind impacts to much of the state regardless of the exact track of the center,” the NHC says.

The National Hurricane Center is continuing to update its website and Twitter accounts with new Hurricane Irma forecast and location information. 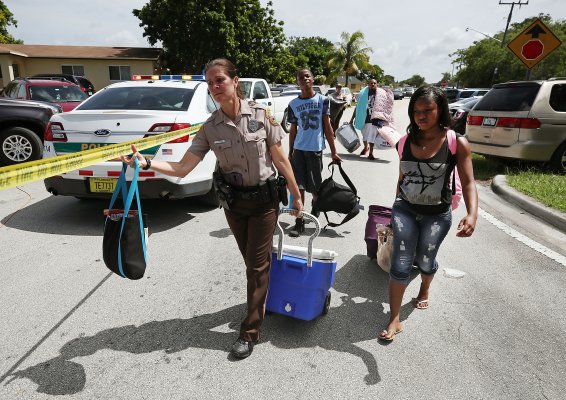 How Miami is Responding to Hurricane Irma
Next Up: Editor's Pick