As Hurricane Irma continued on a collision course toward South Florida with wind speeds topping 150 mph, millions of people in the region boarded up their homes and packed up their bags. In the face of a storm that is predicted to be devastating, the question looming over many families is whether they will be able to afford to rebuild their homes if they’re destroyed.

At the heart of that question is the issue of flood insurance — an increasingly fraught topic not just in South Florida but in the flood-prone regions of the country as a whole. Private insurance companies moved away from offering flood insurance policies decades ago, and the government-run National Flood Insurance Program that fills the gaps is facing its own struggles, including a budget shortfall and a debate over its very existence as a public program.

Recent changes to the program have already had an impact on Florida. Revisions that increased premiums and made it easier to drop coverage have led to a 15% decline in coverage in the state since Congress made the changes five years ago, according to data from the Federal Emergency Management Agency (FEMA).

And even the state’s 1.7 million NFIP policyholders —35% of all the program’s participants across the country — have reason for concern. The program is $25 billion in debt and could easily hit its $30.4 billion borrowing cap under federal law as it pays claims to victims of Hurricanes Harvey and Irma.

The looming funding issue comes as the program, which is set to expire at the end of the month, faces a battle in Congress over its future, with many arguing for a complete overhaul. Beyond the program’s current debt, critics of the program fear the increasing frequency and cost of flooding disasters will leave taxpayers to foot a constantly ballooning bill. In 2016, the non-partisan Congressional Budget Office estimated that damage from hurricanes costs roughly $28 billion per year. Over the next 60 years, those costs are expected to rise at least 40%, after adjusting for inflation.

The program’s financial troubles come from its antiquated way of considering flood risk, policy experts say. The program sets standards for insured properties based on historical flooding data. Under the program, insured homes must be built to withstand what is known as a 100-year storm, or a storm that had a 1% chance of occurring in a given year at the time FEMA mapped the data. The approach makes sense on the surface, but a slew of changes — including sea-level rise, warmer ocean temperatures and new construction that has affected the likelihood of flooding in a given area — have made past risk an uncertain predictor of the future.

“We’ve always looked in the rearview mirror in terms of planning and making policy,” says Laura Lightbody, director of the flood preparedness program at The Pew Charitable Trusts. “If this is the new normal, how are we preparing communities?”

With private companies often unwilling to insure those who choose to live in high-risk areas, the federal government has assumed the risk. Just 1% of the properties insured in the program are responsible for a quarter of the claims, according to a Pew analysis. And many of those homes — classified as repetitive loss properties — have received several payouts over the years. In Florida, 15,000 homes fall into that category, filing 40,000 claims between 1978 and 2011, according to a study published last month by researchers from the University of California, Santa Cruz.

“We build in the floodplain because, from a national perspective, we have a compromised standard for construction,” says Chad Berginnis, executive director at the Association of State Floodplain Managers, saying that the minimum standards for participation in the National Flood Insurance Program are outdated. “This was more of a compromise rather than having a whole lot to do with public safety or what might be good for resilience.”

The challenges facing the National Flood Insurance Program — and the cost to the taxpayer — have led to a number of reform efforts. President Obama issued an executive order in 2015 requiring projects rebuilt in the wake of a disaster with federal funds to be constructed with the effects of climate change-related flooding in mind, though President Trump reversed that rule last month, saying it was an unnecessary burden on development.

In Congress, a number of lawmakers have joined in trying to revamp the program. A group of Republican lawmakers, alarmed at the cost of the program, say it’s time to phase it out. The 21st Century Flood Reform Act, passed by the House Financial Services Committee, would allow the the National Flood Insurance Program to raise its premiums for flood insurance.

Critics say that plan would have the opposite effect of what’s intended, pointing to the reforms instituted in 2012. “Unaffordable flood insurance means fewer people buy it,” Charlie Crist, the former governor of Florida and now a sitting member of Congress, wrote in an op-ed in the Orlando Sentinel. “It’s simple math, with five years of evidence behind it.”

Other legislation, some of which has bipartisan support, calls for fixes to end the repetitive loss. A bill from Florida Republican Senator Marco Rubio and New Jersey Democratic Senator Bob Menendez would reauthorize the program while investing in local efforts to mitigate flood risk. Another piece of legislation from Senators Tim Scott, a South Carolina Republican, and Brian Schatz, a Hawaii Democrat, would require communities in the National Flood Insurance Program to come up with plans to improve local flood risk regulation.

But Congress can move slowly, and supporters of reforming flood insurance say now is the time to act. Not only does the federal program facing a looming budget issue and an expiration date when it will no longer be able to issue new policies, but there is no better time to push for more resilient development than the weeks and months following a storm when communities need to decide how to rebuild.

With reporting from Haley Sweetland Edwards/Miami 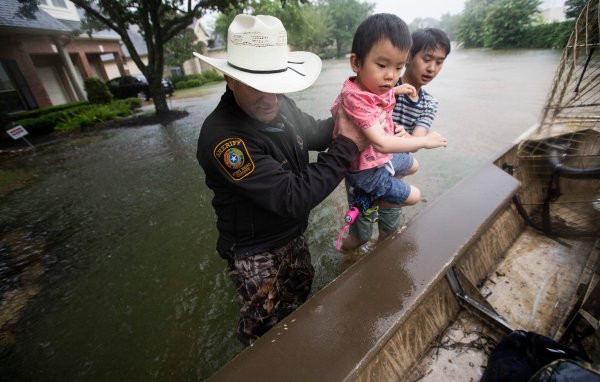 How to Help Kids Understand Disasters Like Harvey
Next Up: Editor's Pick