Hurricane Irma — the most powerful Atlantic hurricane in recorded history — has smashed through Caribbean islands, including Antigua and Barbuda, Saint Martin and Turks and Caicos, leaving a trail of destruction in its wake as it gradually heads northwestwards toward Florida.

The Category 4 storm, which was recently downgraded from being a Category 5 hurricane, has drawn comparisons with Hurricane Andrew, which hit the southwest of Miami in 1992 — making it the last Category 5 storm to make landfall in Florida. But how do the two devastating hurricanes compare?

Hurricane Andrew struck the Bahamas and the U.S. between Aug. 16 and Aug. 28, 1992. Hurricane Irma, on the other hand, occurred later in the year: it first struck the island of Barbuda on the morning of Sept. 6 — and is still making its way through the Caribbean towards southeastern America.

Meteorologist Eric Holthaus posted a gif on Twitter on Sept. 7, which compared the scale of the two hurricanes:

“Not only is Irma more powerful, it’s also much larger,” he wrote in an accompanying blog post. “One recent estimate showed that Irma packs more than five times Andrew’s destructive potential. Its hurricane-force winds cover an area roughly the size of Massachusetts.”

Andrew resulted in 65 deaths, including 15 immediate deaths in Dade Country, Florida, eight in Louisiana and three in the Bahamas. “The direct loss of life seems remarkably low considering the destruction caused by this hurricane,” the NHC’s report states.

At the time of writing, Hurricane Irma has caused at least 20 deaths across the Caribbean, including an infant on Barbuda Island, three people in Puerto Rico and nine in the French territory of St Martin. The death toll is expected to rise, and the Red Cross says an estimated 1.2 million people have been affected by the hurricane and that number could hit 26 million.

Andrew caused immense devastation, particularly on southern Dade County where around 125,000 homes were wrecked. Roughly 25,500 homes were thought to be destroyed by the hurricane in total, and around 101,241 others were damaged.

The extent of the damage caused by Irma is not yet known, but so far the hurricane is thought to have destroyed upwards of 90% of homes on the island of Barbuda, leaving half of the population homeless, destroyed 95% of the island of Saint Martin, where President Donald Trump owns a property, and damaged “police stations, hospitals, school facilities, three or four emergency shelters, a home for the infirm and the aged, as well as the fire station [and numerous homes]” in the British overseas territory of Anguilla.

The total damage caused by Andrew cost around $25 billion, making the storm the most expensive natural disaster in U.S. history at the time, according to the NHC (Hurricane Katrina, which hit the U.S. in 2005, caused $108 billion in damage).

It is impossible to predict right now what the total cost of the damage caused by Hurricane Irma will be. However, it is believed that it will cost an estimated $100 million to rebuild the island of Barbuda, and the British government is planning to send more than $35 million in aid to its territory Anguilla 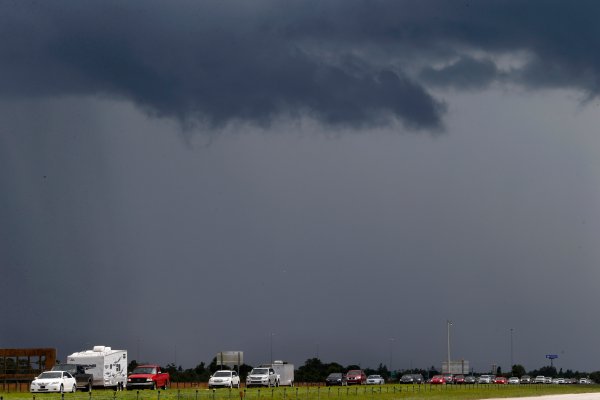 'It's Like Locusts Came Through.' Miami Is Bracing for Hurricane Irma
Next Up: Editor's Pick