Democrats Are Worried Trump Might Pardon People in Secret. Can He Do That?

A Democratic congressman has introduced a bill that would force the White House to announce any presidential pardons publicly within three days of being granted. But could President Trump really pardon someone in secret?

The short answer: In theory, yes.

Presidents have broad authority to issue pardons, as determined by the Constitution. Article II, Section 2 of the Constitution says presidents “shall have power to grant reprieves and pardons for offenses against the United States, except in cases of impeachment.”

The President doesn’t need approval from anyone else in the government to issue a pardon, and can even pardon someone before they’ve been formally charged with a crime, which is the key to answering this question.

In general, pardons are vetted by the Office of the Pardon Attorney in the Justice Department. But the regulations governing that process don’t interfere with or supersede the president’s constitutional authority on this issue, which mentions nothing about needing to notify the public of a pardon.

Trump has already demonstrated that he’s interested in the limits of his pardon power. He pardoned controversial former Arizona sheriff Joe Arpaio without going through the typical lengthy pardon vetting process in the Department of Justice. And the Washington Post reported in July that Trump was asking around about his power to potentially pardon family members, aides or even himself in connection to special counsel Robert Mueller’s investigation. (On that last point: no, he probably could not pardon himself.)

Trump even tweeted on July 22 to note that “the U. S. President has the complete power to pardon,” showing that the issue has been on his mind.

There’s a real historical example of a secret pardon scandal on the state level. In 2003, it came to light that South Dakota governors had granted numerous pardons over decades, the names and records of which had been kept hidden under a 1983 law. It created an uproar in the state, the New York Times reports, and brought attention to the law, which said every document from arrest to conviction could be sealed after a pardon was granted.

But that’s a state law, so it wouldn’t work the exact same way in the White House. If a recipient of a presidential pardon were indicted, the pardon would be revealed during the proceedings. The way a pardon could stay under the radar is if Trump pardons someone before they’ve been charged with a crime. In that case, that person could have a presidential pardon in their pocket to use if they ever do get charged with a crime, but if they aren’t, the public wouldn’t necessarily ever know.

“Long-term secrecy is not the danger because if authorities ever attempt to file charges or pass a sentence, the pardon would come to light,” Illinois Rep. Raja Krishnamoorthi, who introduced the bill to promote transparency in pardons, told TIME in a statement. “The danger we’re facing is that President Trump could sabotage the Special Counsel’s investigation through pardoning his own aides and family members in secret before charges are filed. These pardons could fundamentally derail Special Counsel Mueller’s investigation because key witnesses could feel no obligation to speak to investigators due to the knowledge that President Trump had already shielded them from prosecution.”

Whether or not it’s legally permissible, members of the White House have said that Trump isn’t considering pardoning aides or family members—or himself.

“The President’s thinking about pardoning nobody, because it has been coming up a lot,” former White House communications director Anthony Scaramucci said in July after Trump’s pardon tweet. “There’s an undercurrent of nonsensical stuff.”

The same day, Jay Sekulow, a member of the president’s legal team, said, “We have not, and continue to not have conversations with the president of the United States regarding pardons. Pardons have not been discussed and pardons are not on the table.” 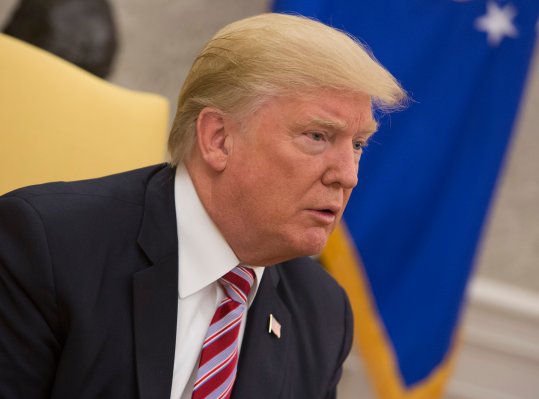