A man in Texas says he got infected with flesh-eating bacteria while helping his neighbors in the aftermath of Hurricane Harvey last week.

J.R. Atkins, of Missouri City, Texas, wrote in a Facebook post that he was hospitalized after what he thought was a small bug bite turned into swelling and some numbness in his hand. He had been kayaking through flooded streets to check on his neighbors, Atkins wrote, and noticed the bite when he returned home.

“All was well and people were actually out and about taking,” he wrote. “Came home around 4pm and noticed a small bite on my left arm not huge but probably Nickel sized swelling.”

At first he wasn’t concerned, but when the swelling spread the next morning, Atkins went to Houston Methodist in Sugar Land, according to KPRC, a local news station. The hospital figured out he had flesh-eating bacteria, or necrotizing fasciitis, and quickly prepared him for several surgeries.

The bacteria Atkins contracted can quickly turn deadly, according to the CDC. Diagnosing the bacteria early, getting antibiotics and surgery are important to stopping its growth.

“If it wouldn’t have been for the nurses here at Methodist, I probably would have not been able to make it through it. I mean, there’s no way I could have made it through it,” Atkins told KRPC.

Atkins is a former firefighter and medic, according to KPRC, and he said his knowledge of the symptoms helped him get to a hospital in time. But he’s worried that other people spending time in storm water won’t know what to look for. He told KPRC that people should take precautions like wearing gloves, masks, boots and goggles if they are spending time in flood waters.

In his Facebook post, Atkins said he is feeling better and hopes to be discharged from the hospital soon. 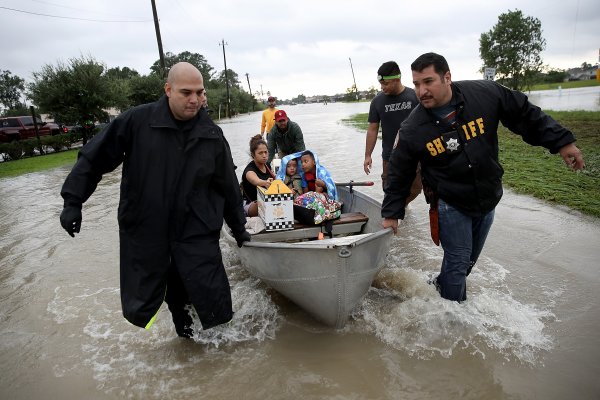 Beyonce, George Clooney and Oprah Are Hosting a Telethon for Harvey Relief
Next Up: Editor's Pick