These Are President Donald Trump's Only Options for North Korea

There’s good reason why U.S. presidents have kicked the can down the road on confronting North Korea. But as U.S. Ambassador to the U.N. Nikki Haley put it this week, “there is no more road left.” Maybe. What are President Trump’s options, then?

Begin with the “triumph-of-hope” scenario — a brokered deal between North Korea, the U.S. and other stakeholders (read: South Korea, China, Japan and Russia) that eliminates the nuclear threat from Pyongyang while allowing for continued survival of the Kim regime. Problem is, those two goals appear mutually exclusive. Kim Jong-un is aggressively pursuing nuclear weapons because he believes they offer his only real guarantee against a future U.S.-led regime change. Is he wrong? Ask Saddam Hussein.

But any deal that allows Pyongyang to keep a nuclear weapon that it can attach to a missile capable of hitting the U.S. is a non-starter for Washington; some analysts estimate that threat will become a reality as soon as next year. There’s no middle ground. Even China and Russia’s proposed temporary “freeze” on North Korea’s nuclear program in exchange for the U.S. ratcheting down its military exercises is too much for Washington, which bristles at the implied equivalency between legal military exercises with South Korea and the illegal pursuit of nuclear weapons by North Korea.

If, as Vladimir Putin correctly noted this week, Kim will eat grass — or let his people eat grass — to keep his weapons, more sanctions won’t make a difference. The U.S. and the U.N. have had sanctions in place against North Korea since 2006 (when Pyongyang conducted its first nuclear test). According to a study by the Peterson Institute for International Economics, sanctions only work about a third of the time in getting countries to change their behavior somewhat, and they’re most likely to work when the goal is “modest and limited.” It also helps when the government burdened with sanctions wants to escape international isolation. That’s not the case here.

Of course, North Korean sanctions are really sanctions against China, North Korea’s main benefactor. China provides more than 90% of Pyongyang’s trade and most of its food and fuel. The U.S. has already sanctioned some Chinese entities doing business with North Korea, with little result. But there’s a limit to how much the U.S. can push China before it triggers a full-blown trade war — the U.S. does $650 billion a year in trade with China. The U.S. would win a trade war, but at a very high cost, given the lack of international support for the Trump Administration. Not to mention that China’s authoritarian leadership will weather the domestic blowback from a sharp economic slowdown far better than elected leaders in the U.S. or anywhere else.

Direct targeting of North Korea’s nuclear weapons might seem a logical option, but U.S. intelligence estimates that North Korea has anywhere from 30 to 60 bombs. What might Kim try to do with the weapons the U.S. misses? A U.S. ground invasion would give Kim plenty of time for quick attacks on South Korea, Japan and U.S. troops, to say nothing of the hostile response it would provoke from China.

But the biggest risk of any military strike against North Korea is the “Seoul problem.” North Korea has hundreds of pieces of well-fortified artillery trained on Seoul, which sits just 35 miles from North Korean territory. Experts believe North Korea could kill 100,000 people in the first few hours of shelling.

North Korea has an army of 1.1 million personnel, in addition to 4,300 tanks, 2,500 armored vehicles, 70 submarines, 300 helicopters and 1,300-plus aircraft. That won’t save North Korea’s government from an all-out U.S. attack, but it’s more than enough to delay the inevitable long enough to kill large numbers of soldiers and civilians on the way down.

An even bigger problem with regime change is multinational conflict over what comes after. The Kim family has ruled North Korea for more than 70 years. Generations of North Koreans have known no other system. Should the regime collapse, rough figures estimate that upwards of 3 million North Korean refugees would flee into China (crossing to South Korea is much harder because of the militarized and heavily mined boundary between the two countries). First questions include: Where will North Korea’s nuclear material go? Where will U.S. troops go? Bigger questions: What will China want, and what will it do to get that outcome? Will Korea reunify? Who will pay? No government is ready to answer these questions.

We’re left with one option: do nothing. There are now nine countries that have nuclear weapons — the U.S., Russia, China, the U.K., France, Israel, India, Pakistan and North Korea. Each time a new country has acquired a nuclear weapon, there has been anticipatory anxiety from outsiders followed by grudging acceptance — consider Pakistan in 1998, when it tested its nuclear weapons for the first time. It was slapped with sanctions (along with India, which also conducted tests), but those were gradually lifted as the world found no alternative to this new geopolitical reality. Can the same weary resignation prevail with North Korea? Mutually assured destruction prevented a U.S.-Soviet nuclear exchange.

But Pakistan and India had allies with whom to communicate and a broad set of interests to protect, and U.S. and Soviet leaders had a common interest in fighting by proxy to avoid suicide. Can any U.S. president assume it’s safe to live within target range of the world’s most belligerent government? Has North Korea given the world reason for long-term confidence in its maturity? There is no bet President Trump could make that comes with higher stakes. 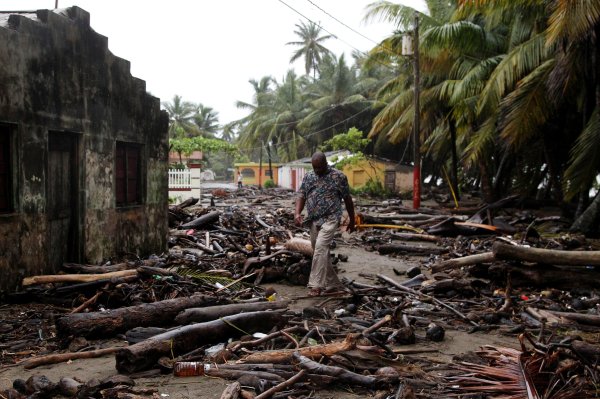 These Are The Islands Hit By Hurricane Irma
Next Up: Editor's Pick