No, Sharks Will Not Attack You During a Hurricane

As Hurricane Irma hurtles toward Florida and the east coast, you might be afraid of potential shark attacks during the storm — but experts say not to be worried.

Natural disasters often bring out the Internet pranksters, and fake photos of sharks swimming in unusual places during a storm are one of the most popular types of hoaxes. But the chaos and destruction of a hurricane can cause people to fall for doctored images they might otherwise recognize as fake.

“There’s going to be a lot more people killed by the storm or a heart attack. Nobody’s really going to get killed by a shark during a hurricane,” says Bradley Wetherbee, a professor of biology who studies sharks at the University of Rhode Island. “That’s the last thing I’d be worried about.”

Most sharks are not going to be focused on attacking you during a hurricane, because they want to get themselves to safety, according to Chris Lowe, director of the Shark Lab at California State University, Long Beach.

Sharks — and other fish — are sensitive to barometric pressure, which drops when a storm comes in, Lowe says. Research has shown sharks can feel the change in pressure and swim toward deeper water where they’ll be safer. “Most animals will get nature’s alerts and leave,” Lowe says.

Even animals that aren’t as sensitive to the changes in barometric pressure will likely leave for deeper water when they see other animals do so. This is similar to how humans behave before a hurricane — if people see their neighbors evacuating before the storm hits, they may follow suit.

So where do all the fears and memes about sharks during hurricanes come from?

“There are good examples of animals that don’t get out in time, that do get washed to shore, or get washed into people’s swimming pools and lawns,” Lowe says. “Those things do happen, but most animals do go to deeper water.”

And if sharks do end up washed ashore, they’ll be far from their ideal environment. The water in a hurricane is not all salt water like the ocean, Wetherbee notes, and flooding will likely be too shallow for sharks to do well on land.

Before a storm hits, you might see more sharks and other fish than at other times. Dozens of baby nurse sharks were spotted in the ocean near Naples this week ahead of Irma, according to the Naples Daily News.

“Usually there’s a lull in the weather [before storms]. Conditions get better so it may be easier to see them in those time periods,” says Lowe.

This “calm before the storm” and the abundance of fish moving to deeper water could provide feeding opportunities for bigger animals like sharks, according to Lowe. So even if a rare shark does find itself washed ashore, it will hopefully already be full.

Just be sure to remain skeptical of any Sharknado-style photos or images of sharks swimming on highways. 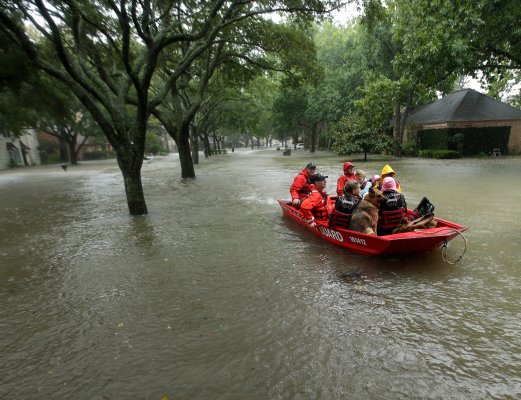 People Are Rescuing Pets From Hurricane Harvey Flooding
Next Up: Editor's Pick