This Is How Telethons Became a Fundraising Tradition

Milton Berle taking a call from a viewer while hosting a fundraiser for the Damon Runyon Memorial Cancer Fund on N.B.C's broadcasting channel.
Martha Holmes/The LIFE Picture Collection—Getty Images
By Olivia B. Waxman

When Hollywood bands together for Hand In Hand: A Benefit For Hurricane Harvey Relief on Tuesday night, the entertainers who show up will be participating in a long-running tradition of lending star power to important causes via televised fundraisers.

While the comedian Jerry Lewis became the biggest celebrity telethon-er when he started hosting fundraisers for the Muscular Dystrophy Association in the ’50s he wasn’t the first to do one. Comedian Milton Berle is credited with hosting the first telethon, which NBC broadcasted from 12 p.m. on April 9, 1949, to 3:55 a.m. on April 10th.

The 16-hour telecast raised about $1,100,000 — more than $11 million in today’s dollars — for the Damon Runyon Cancer Fund, named after the journalist and short-story writer.

The event prompted LIFE magazine, in its April 25, 1949, issue, to feature a photo essay and timeline of what it called “probably the longest sustained vaudeville performance on record.” Berle’s sister Rosalind managed the models and chorus girls who answered the phones and, the feature noted, “many callers just wanted to talk to the show’s handsome chorus girls.” Entertainment included a quiz show with top radio commentator H.V. Kaltenborn, a performance by jazz musician Eddie Condon and his band, and Berle yukking it up with fellow vaudeville comics Benny Rubin and Jerry Bergen. Berle’s mother Sandra also showed up — “Show your teeth, Mother,” the comic quipped, “but don’t take them out!” — and a restaurant “eager to get publicity” sent Berle a turkey leg, which he gnawed at messily before answering calls with his mouth full.

“No comedian ever had it so good,” the magazine wrote. “The reward for a pledge of money to the fund was a chat with Berle, who said ‘Hello’ and ‘Thank you’ approximately 5,500 times…The few breaks in the all-Berle program came when Berle changed suits (four times), shirts (eight times) or shared the spotlight — when the TV program briefly switched to a race track — with a bunch of horses.”

Berle, considered by many to be the first big American television star, would have been the kind of big name necessary to draw in donations: the following month, in a TIME cover story about the popularity of his show Texaco Star Theater, the magazine proclaimed him “the undisputed No. 1 performer on U.S. TV.” And, given the success of the televised fundraiser he led, it’s no wonder that the TV stars who followed in his footsteps would continue the tradition he began. 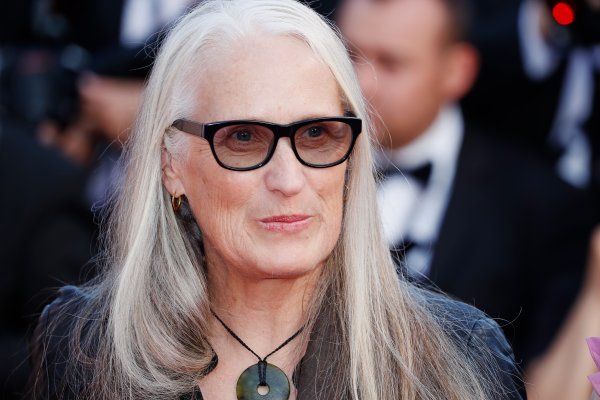 Jane Campion on How Top of the Lake Changed Her Opinion on Sex Work
Next Up: Editor's Pick