South Korean Ambassador Cho Tae-Yul tries to get the attention of Ambassador to the UN, Nikki Haley during a United Nations Security Council meeting on North Korea on Sept. 4 in New York City.
Stephanie Keith—Getty Images
By Philip Elliott

On the morning of Sept. 3, America’s top military, intelligence and diplomatic officials were summoned to present Donald Trump with their assessment of the mounting crisis on the Korean Peninsula. Events were moving fast. Over the course of the previous week, North Korea’s ruler Kim Jong Un had launched a missile on a 1,700-mile flight over Japan and publicly displayed what he claimed was a hydrogen bomb that could be placed atop an intercontinental ballistic missile. Then, the North announced that it had tested its largest nuclear device to date, a weapon whose power unleashed shock waves measuring 6.3 on the Richter scale. That Kim had the means to annihilate an American city–something U.S. Administrations had worked for more than 20 years to prevent–seemed no longer a specter but a reality.

And yet two hours before Trump got his full download from the brass, he launched a rhetorical attack against … America’s most vulnerable ally in the region, South Korea. “South Korea is finding, as I have told them, that their talk of appeasement with North Korea will not work, they only understand one thing!” Trump tweeted just before 8 a.m. Meanwhile, senior officials were already in contact with the anxious staff members of the South’s President, Moon Jae-in, to arrange a call between the leaders. Their conversation, on Sept. 4, greenlighted billions of dollars more in military aid from the U.S. as well as boosted South Korea’s defense capabilities. One U.S. official said the tweet had little impact because governments have learned not to take Trump’s tweets at face value.

In fact, that is precisely the problem, and one without precedent. Americans may have become inured to Trump’s rhetorical attacks on political enemies and allies. But in the dangerous world of nuclear deterrence, where it might take just 30 minutes for a nuclear-tipped missile to reach the West Coast from North Korea, the stakes are very different. Trump has traded in his reality show for policy decisions that could mean life or death for hundreds of thousands of people. Some Korea experts say that at this point, the best outcome of the crisis may be to find a way to live with a nuclear North Korea. But even getting to that undesirable standoff would require clarity and unity with allies, and Trump’s murky goals and message are little comfort. “We will not be putting up with what’s happening in North Korea,” Trump said on Sept. 6.

The dangerous uncertainty is not all on Trump. U.S. intelligence has long been unclear about both the capabilities and intentions of Pyongyang. Few expected Kim to gain the ability to target mainland American cities with powerful, missile-delivered nukes so soon. And while most analysts see the North Korean regime’s pursuit of nuclear weapons as a means to preserve power and ward off threats, no one knows how reckless the 33-year-old leader may be, especially if he feels backed into a corner. Trump’s ad lib diplomacy may be partly in response to that dearth of good information. During meetings with his war Cabinet in the White House basement during his first seven months in power, Trump routinely excoriated advisers about why they didn’t know more, pointing to the money that U.S. intelligence services had spent in providing incomplete information, say Administration officials.

But Trump’s freelancing isn’t helping. Top aides say they have little sense of what the boss wants to see from them or from partners such as China and South Korea. The Sept. 3 tweet caught U.S. officials, who were up all night sifting through intelligence reports and policy options, by surprise. “They have no strategy at the moment,” says one top adviser to Republican leadership on Capitol Hill.

Trump’s nominal allies in the Administration and on Capitol Hill are trying to turn the message to friends and foes abroad in the direction of stricter economic sanctions, a bolstered military deterrent and diplomatic leverage to force Kim to slow his rush to nuclear-power status. Whether Trump will heed their advice and whether Kim will take into account the quirks of American foreign policy at this particular moment are open questions. With nukes now potentially targeting the U.S., the stakes in the fight over clarity and unity of message could not be higher. 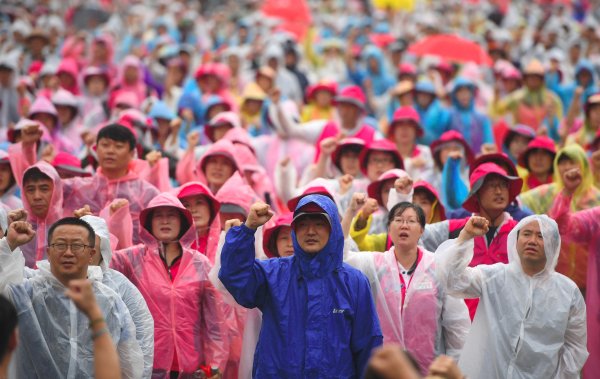 The Argument for War with North Korea Is No Argument at All
Next Up: Editor's Pick