Bangladesh Protests Landmines on Myanmar Border as 146,000 Refugees Flood In

Some 146,000 Rohingya refugees fleeing violence in western Myanmar’s troubled Rakhine state have crossed the border into Bangladesh, adding to a burgeoning humanitarian crisis.

The updated numbers were posted by U.N. spokesperson Stephane Dujarric who, speaking in New York Wednesday, described “hungry and malnourished” women and children arriving at refugee camps and said the World Food Program would require more than $11 million to feed them, the Associated Press reports.

On Wednesday, Bangladesh summoned the Myanmar ambassador in Dhaka over allegations Myanmar government troops are planting landmines along the border, the BBC reports. News of landmines was first reported by Reuters. In a statement, Bangladesh’s foreign ministry “demanded immediate measures from Myanmar to de-escalate the ongoing violence.”

A Myanmar military source told the BBC soldiers had not recently mined the border. Myanmar is one of the world’s most heavily mined countries after decades of conflict between the military and various ethnic rebel groups.

In the past week there have been at least three injuries from landmines along the border, according to the New York Times.

Bangladesh — which has previously been criticized for failing to recognize the Rohingya as refugees — announced it will set up a new camp to accommodate the influx of people fleeing the crackdown in Rakhine, although it did not give details on when that camp would be ready.

The uptick in refugees follows the latest outbreak of violence in Rakhine, which erupted after Rohingya militants attacked police and paramilitary outposts there on Aug. 25. Ensuing clashes between the Myanmar army and Rohingya insurgents killed about 400 people, according to government figures.

In the fortnight since the initial attacks, the military has been engaged in what it describes as “clearance operations” against insurgents. Rohingya villagers who have fled to Bangladesh have spoken of a massacre perpetrated by the Myanmar military, and soldiers burning down their villages.

The Myanmar government has said the insurgents killed civilians and burnt houses. State counselor Aung San Suu Kyi blamed “fake news” and a misinformation campaign for fueling the crisis, and said her government was defending “all the people.” 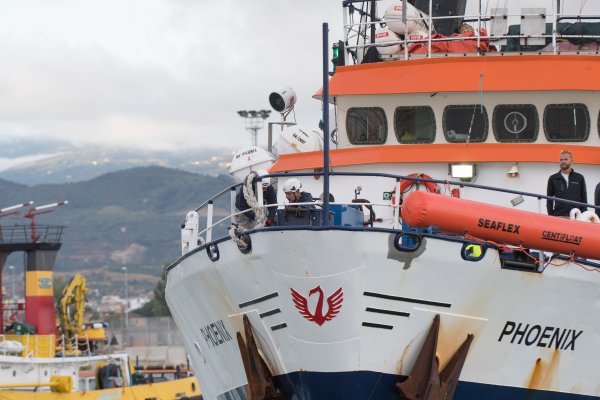 Mediterranean Rescue Ship Moves to Asia to Help Rohingya
Next Up: Editor's Pick