(SEOUL) — Protesters clashed with thousands of police at a South Korean village on Thursday as Seoul deployed the four remaining launchers of the U.S. anti-missile THAAD system designed to protect against mounting threats from North Korea.

The South’s defense ministry confirmed on Wednesday the launchers would be installed on a former golf course near Seongju City some 217 km (135 miles) south of Seoul. Two launchers and a powerful radar are already in place at the site as part of the U.S. Terminal High Altitude Area Defence (THAAD) system.

Early on Monday, around 8,000 South Korean police gathered in the village of Soseong-ri, along the only road that leads up to the golf course, to break up a blockade of around 300 villagers and civic groups opposed to THAAD.

Some 38 protesters were wounded in tussles with police, with 21 sent to hospital, according to a Seongju Fire Station official. None of the injuries were life-threatening, said Kim Jin-hoon.

The Soseong-ri residents say they do not have a political motive but are against the deployment of THAAD as their lives have been disrupted by the dozens of military helicopters, buses, trucks that travel through the small melon-farming town of 80 residents.

The decision to deploy THAAD, designed to shoot down short- to medium-range missiles mid-flight, has drawn strong objections from China. It believes the system’s radar could be used to look deeply into its territory and will upset the regional security balance.

South Korea’s defense ministry has said the deployment is necessary due to the imminent threat from North Korea, which has launched numerous missiles since South Korean President Moon Jae-in took office in early May.

According to a United Nations draft resolution seen by Reuters on Wednesday, the United States wants the United Nations to impose an oil embargo on North Korea, ban the country’s exports of textiles and the hiring of North Korean laborers as part of new sanctions on the North. 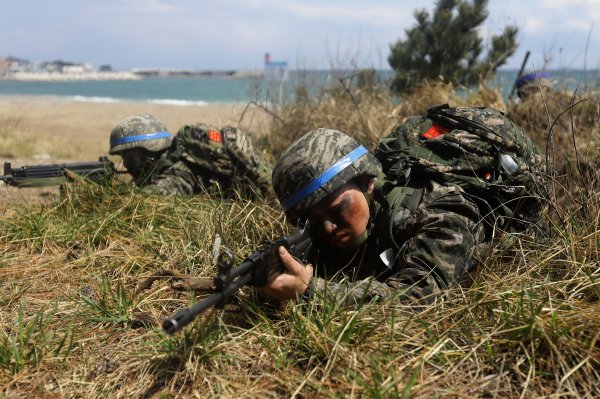