President Trump Says Ivanka Asked Him 'Daddy Can I Go With You?' to North Dakota

President Donald Trump invited a surprise guest to the podium during his speech on tax reform in North Dakota — his daughter Ivanka Trump, whom he credited with softening his image.

“Everybody loves Ivanka,” he said, motioning his daughter up to the stage. “Sometimes they’ll say you know he can’t be that bad a guy, look at Ivanka.”

The President, who was in North Dakota to tout his tax reform initiative, also explained why his daughter was accompanying him, despite the fact that she is a Senior aide in the West Wing and is working on a childcare tax credit as part of the reform initiative.

“She’s so good she wanted to make the trip. She actually said “Daddy can I go with you?'” he said of his 35-year-old daughter, who is also an adviser to the President, adding that she had expressed her fondness for the state.

“Hi North Dakota,” she told a cheering audience after stepping onstage. “We love this state so its always a pleasure to be back here. You treated us very very very well in November and have continued to, and we like showing the love back.”

Ivanka, who has met with lawmakers on Capitol Hill to discuss paid family leave and childcare tax credits tweeted a photo of herself on Wednesday at an event discussing childcare tax credits. “I look forward to making this expanded Child Tax Credit a reality! Working parents deserve #TaxReform,” she wrote on Twitter. 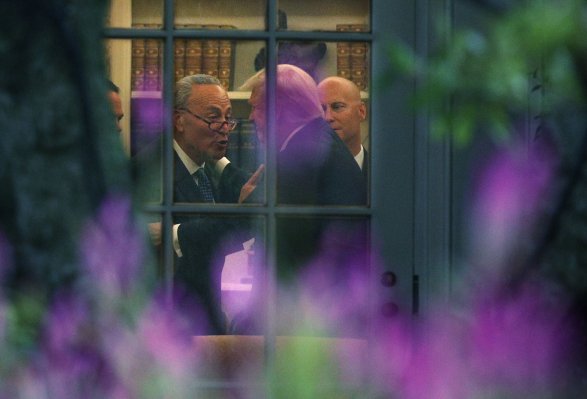 The Story Behind That Viral Photo of Donald Trump and Chuck Schumer in the Oval Office
Next Up: Editor's Pick