Seattle Seahawks defensive end Michael Bennett says he was restrained and had a gun pointed at him by officers of the Las Vegas Police Department last month for no reason other than being black and being at the “wrong place at the wrong time.”

Bennett posted a message on social media describing the incident.

Bennett says he was in Las Vegas on Aug. 26 on his day off to attend the Floyd Mayweather–Conor McGregor fight. After the fight, Bennett says he headed back to his hotel when he heard what he thought were gunshots.

He says he ran away from the area seeking safety when he was confronted by a Las Vegas police officer who ordered him to the ground.

“All I could think of was ‘I’m going to die for no other reason than being black and my skin color is somehow a threat.’

“Terrified and confused by what was taking place, a second officer came over and forcefully jammed his knee into my back making it difficult for me to breathe,” Bennett wrote.

Bennett says his fingers went numb because the handcuffs were so tight. He repeatedly asks the officers what he did to be handcuffed.

Later, Bennett says he was placed into the back of a police car and only released when officers verified his name and that he was professional football player.

“The system failed me,” Bennett wrote. “I can only imagine what Eric Garner, Michael Brown, Trayvon Martin, Tamir Rice and Charleena Lyles felt.”

Bennett says he has hired an attorney to investigate the incident and that he plans to explore his legal options, including a potential civil suit for violation of his civil rights.

Bennett has said he plans to protest all season during the playing of the national anthem to shed a light on racial injustice in the United States. 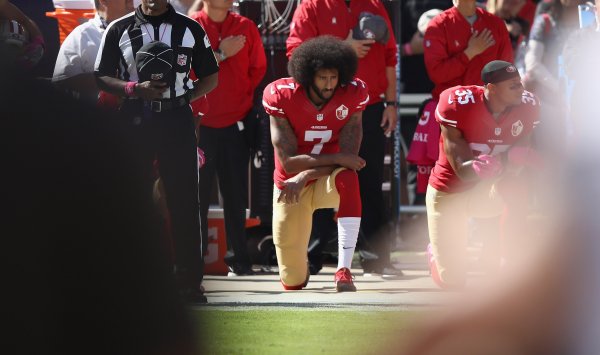