North and Saint are getting a little sibling!

The surrogate whom Kanye West and wife Kim Kardashian West hired to carry their third child is pregnant, sources confirm to PEOPLE.

“The entire family is over the moon. Kim had been looking for a surrogate for months until recently when she found the perfect candidate,” a source tells PEOPLE.

“Given her health scares in the past, Kim felt the need to hire a surrogacy agency that helped serve as the liaison in finding a healthy woman who would be a great surrogate option for her and Kanye. Both of them have been super involved in the process.”

The source continues, “They want everything to be perfect and for the baby to be extremely healthy. They don’t want any complications and Kim is providing an ideal eating regimen and diet so everyone knows what the baby is consuming before it’s born.”

Want all the latest pregnancy and birth announcements, plus celebrity mom blogs? Click here to get those and more in the PEOPLE Babies newsletter.

RELATED VIDEO: Kim Kardashian West Warmed to Surrogacy Because “She Really Misses Having a Baby in the Family”: Source

A source confirmed to PEOPLE in June that the couple had hired a surrogate to help them expand their family. The news came some time after Kardashian West was advised of the risks of carrying another child on her own due to her struggles with placenta accreta during both her previous pregnancies.

“I’d just love nothing more than to expand my family and just know that I have this world at home that’s safe,” the soon-to-be mom of three said on an April episode of Keeping Up with the Kardashians.

She added, “And if for some reason I left this earth sooner than I really wanted to, then my kids would have a support system at home so that I know that they would be okay if I wasn’t here.”

A source close to Kardashian West told PEOPLE in June that while she “was never going to let herself get pregnant again” and initially “felt two healthy kids were enough,” she eventually had a change of heart.

“As Saint got bigger though, she talked more and more about a third baby,” the source said, adding, “She thinks her kids have grown up too fast.”

“She really misses having a baby in the family. They looked for a while before they found the perfect surrogate.”

RELATED: How Kanye and Kim Kardashian West’s Relationship Has Changed as They Prep for Baby: The Past Few Months ‘Have Been Good’

The spouses’ decision to turn to surrogacy is no surprise, considering what the reality star, makeup guru and Kimoji creator went through as a result of placenta accreta.

“My doctor had to stick his entire arm in me and detach the placenta with his hand, scraping it away from my uterus with his fingernails. How disgusting and painful!!!” she blogged about her experience in giving birth to North.

“My mom was crying; she had never seen anything like this before,” Kardashian West continued. “My delivery was fairly easy, but then going through that — it was the most painful experience of my life! They gave me a second epidural but we were racing against time, so I just had to deal.”

Though the baby on the way will be the couple‘s third child, it may not necessarily be the last. Shortly following the news that the spouses had hired a surrogate, a source told PEOPLE that West “would want a family of five or six if it was up to him” — but that his wife took a little while to come around.

“She would make funny comments like, ‘Who knows what will happen … Kanye will probably convince me [to have more kids]!’ ” the source explained of Kardashian West. “And she did warm to the idea!” 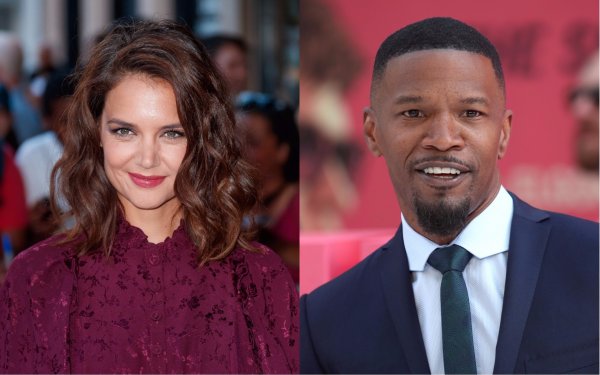 The Internet Has Plenty to Say About These Beach Photos of Katie Holmes and Jamie Foxx
Next Up: Editor's Pick