'It Really Was All Hands on Deck.' How Federal Health Officials Responded to Hurricane Harvey

As the floodwaters recede in Houston, the focus has turned from emergency response to cleanup and recovery.

Among the federal agencies looking to help the city bounce back is the Department of Health and Human Services, which is doing everything from to helping run pop-up hospital units to moving patients from the storm’s path.

U.S. Health and Human Services Secretary Tom Price visited Texas with President Trump on Aug. 29, and he plans to go again in the coming weeks. He’s also looking ahead to the federal response to Hurricane Irma, which is headed toward Puerto Rico and Southern Florida.

Price spoke with TIME in the Secretary’s Operations Center, aka, “The SOC,” at HHS headquarters on Tuesday evening. The SOC serves as the HHS hurricane nerve center, where Price is briefed twice a day on the emergency and recovery efforts. Screens cover the walls and track everything from current electrical outages in Texas and Louisiana to which pharmacies and hospitals are open or closed.

This interview has been lightly edited for length.

What is the plan for Houston and the surrounding area in terms of the contaminants in the water?

We go through a methodical process in these activities. Obviously the first phase is the redeployment to get ready for the storm, and then it’s the rescue and life-saving activities, and then it is the recovery activities, and part of the recovery activity especially with a storm of this degree is what to do with the standing water that remains, and then what to do with everything that was affected by the flooding which is a massive area. The challenges from a health standpoint are the bacteria and viruses that thrive in marine environments, contaminants, chemical contaminants from wherever the floodwater was, those chemicals can leach into the water. The biggest thing is the mold that exists afterward once the water recedes. In homes and businesses, everything that was covered with the water is subject to mold. Along with FEMA, who directs the recovery phase, our job is to make sure that those issues are addressed. From a bacteria and a viral standpoint, those folks that were exposed to it and were seen in the evacuation center, in the shelter, we’ve seen over 3,000 patients in the health centers with our folks since Harvey started. The majority of those are not related to the flooding itself, but there are some, there are rashes, diarrhea, you get bacterial components from the place where the water has been, so you get E. coli infections and the like that give diarrhea, nausea and vomiting, and then we will be working with FEMA on the mold to make sure people are as protected as possible as they clean out their homes.

So is it just FEMA taking the lead on handling the contaminants in the water and the aftermath of that?

EPA tests the water to determine what is in the water. We test the water as well for bacteria and for other contaminants. It is EPA’s lead on the chemical contaminants, our lead is on the medical contaminants, on the bacterial contaminants, and the virus and the mold. We take care of the preparation for and the treatment of the medical challenges that occur. It is a team effort. FEMA is the lead in all of this, but our role is to make certain that people are as protected as possible whether it is through vaccination, if we get an outbreak of something that can be protected by vaccination, whether it is through just the normal educational process of letting folks know what they need to be doing right now, especially in the area of mold.

Are you preparing for a vaccination need on something specific?

We are not only preparing, we are doing so as we speak. When you get large numbers of people in a shelter, then they are at risk of flu-like challenges, and so we began [flu] vaccination immediately upon individuals, that were at risk when they came into the shelter. We’ve been relatively fortunate, knock on wood, that we have not seen a significant contagious outbreak occur.

What about handling the public health risk of oil, gas, chemical plant runoff ?

All of that, the water is tested by EPA, and for example, when they had the chemical plant that had a spontaneous combustion and had the fire, there was a evacuation for a mile and a half area, and what was tested with our observant was the air, to make certain that no noxious fumes were in that air, and there weren’t thank goodness. All of that has been handled. But again the whole activity is coordinated by FEMA, and all of us work together to it so that we do as best we can with the situation.

You declared a public health emergency. How concerned are you about the escalation of that going forward?

We’ve got more [hurricanes] coming. Actually I’ve been incredibly heartened by the response on the ground to Harvey. When I was down there last week I was really inspired by the neighbor helping neighbor and Texan helping Texan sense that you got. It really was all hands on deck. With the President’s declaration of an emergency, with our public health emergency declaration prior to landfall, that was incredibly helpful in pre-deploying folks and getting people in the area or close to the area. We pre-deployed most of these people to Baton Rouge and to Dallas, and then were able to move them into the affected area, which is so large it is hard to get your arms around. 12 million individuals were affected by the storm itself. The geographic area is the size of land mass from New York to Boston, or two-thirds of the state of Florida. It is a massive land mass.

How do you understand the role of government in helping Texas, east Texas, Louisiana, dig out from this?

All of these emergencies are directed by the local folks. The local cities and counties determine whether they can handle a situation, and when they can’t, then they appeal to the state, and then the state to the federal government. So it is a whole logical arranged chain of responsibility that is set up. So when Texas tells us, or when Florida for example lets us know they are concerned about what is coming, then we begin to pre-deploy assets to make certain we are prepared to respond to whatever challenge might exist.

What specifically are you looking for in terms of funding from Congress?

The President has asked for $7.8 billion in this first supplemental that will cover the initial costs. The needs go on for years. Whether it is in getting folks back in their homes, back in their businesses, back into schools, communities, this will be life-changing for many, many individuals in that area. Our goal is to respond in the acute phase, in the rescue and life-saving phase, and then work as best we can with the state and local folks to facilitate their ability to get back to normal as rapidly as possible.

Should Congress take up flood insurance funding? Does that need to be reformed?

In the past, you voted for the Katrina funding package and not for the Sandy funding package, how has this made you reconsider how funding from the federal government should work?

The responsibility that we have, the charge that we have, is to make certain that we are doing all that we can for the well-being, health and safety of the American people. In an emergency what that means is that we address the medical needs, the health care needs, the veterinary needs, and the challenges that exist from a mortuary standpoint. So all of those things that are our charge, we need to make certain that we are getting the kind of resources necessary to fulfill that responsibility.

What direction have you been getting from the White House directly about what they want you to be doing in this time?

All of this is organized through FEMA. The President has given, again, incredible leadership, from an early declaration of emergency from Harvey, the first time a Presidential declaration from the Stafford Act was proclaimed prior to landfall, which again allowed us then to have the flexibility that we needed to begin moving those assets, along with the public health emergency that we declared. So I think again what the President has said, is he’s got folks in place that he has confidence and trust and faith in, and allow them to move and do their job. Acting Secretary Elaine Duke at the Department of Homeland Security and Brock Long, who is the FEMA director, just incredible work that they’ve been doing, and it is just heartening to work with people with such dedication. 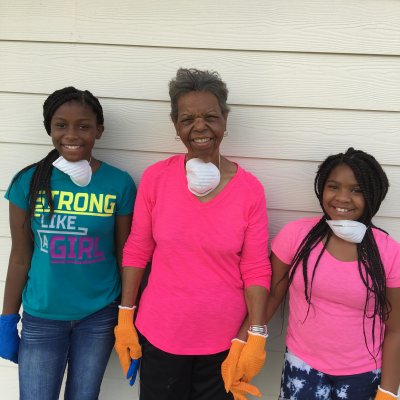 How Hurricane Harvey Inspired Young Volunteers
Next Up: Editor's Pick